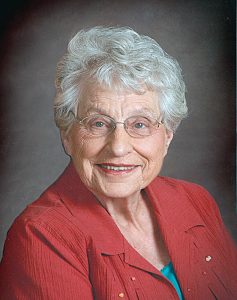 Leona Beatrice Ubbelohde, 92, of Colfax, passed away on Thursday, November 11, 2021, at the Colfax Health and Rehabilitation Center.

She was born on August 28, 1929, at the family homestead on Trout Brook Road in the St. Joseph Township, in St. Croix County, to Carl “Charlie” and Amanda (Radke) Dahlke. Leona was baptized at Salem Lutheran Church in Stillwater. From 1935-1943, Leona attended McKinley School (a one room school, and also the same school her dad attended in 1900). She was confirmed at Salem Lutheran Church on Palm Sunday. Leona graduated from Hudson High School and was a queen candidate for St. Paul’s Winter Carnival. Leona attended River Falls State Teacher College, graduating with a B.S. in Education, in 1951. This is where she met her loving husband, Don; they were married August 26, 1950. From 1951-1952, Leona taught school at Glenwood City, while staying at Reverend Koosman’s, while Don taught and lived at Dallas, WI. From 1953-1954, Leona taught at Chetek while she and Don resided in Dallas, WI.

Don and Leona moved to Colfax in 1954, where they raised three children: Lisa, Mona, and Craig. From 1966-1994, Leona taught at Colfax Elementary. She was one of the two, first teachers of Head Start when it was a pilot program. Head Start is an education program initiated by President Lyndon B. Johnson, as part of “The War on Poverty”. After retiring for one semester, Leona continued subbing until 2014, as Don needed her fulltime attention due to having dementia.

Leona was a longtime member of Colfax Lutheran Church, being a dedicated faithful servant as: Sunday School Teacher/Superintendent, Vacation Bible School Teacher, Bethel Series Teacher for 4 years, member of the church council, and a member of the Ladies Aid. During Covid lockdown, Leona would read Pastor Walck’s sermons to her friends at the Colfax Health and Rehabilitation Center.

Leona and Don formed many cherished friendships over the years, with fellow antique collectors. They enjoyed playing cards with friends, and many memorable family trips to WI state parks, insurance conventions, to other states, and Canada. Don and Leona also enjoyed local bank-sponsored bus trips, tours across the country, to Alaska, NE Canada and Germany.

Visitation will be held Monday, November 15, at Sampson Funeral Home, 1017 E Railroad Ave, Colfax from 4:00 – 7:00 p.m. Funeral services will be held on Tuesday, November 16, at Colfax Lutheran Church, 601 River St., with a visitation at 10:00 a.m. with services to follow at 11 a.m. The funeral service will be livestreamed on the Colfax Lutheran Church Facebook page. Burial will be at Evergreen Cemetery following lunch.

During this time of high COVID-19 infection rates, and “break-through” Covid cases, the family is requesting masks be worn. In lieu of flowers, memorials may be made to the Colfax Lutheran Church. Heartfelt thanks go out to the staff of the Colfax Health and Rehabilitation Center and Troy Knutson. Sampson Funeral Home in Colfax is assisting the family with arrangements.