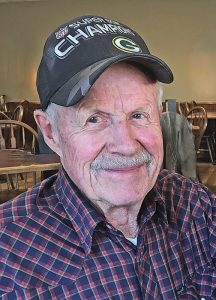 Don was born on January 23, 1933 to Magnus (Mack) and Alice (Weinhardt) Eliason in Luck, WI. He attended North Valley Lutheran Church and Trap Rock School until 8th grade when the family moved to New Richmond, WI in 1947. He became a member of the First Lutheran Church and was confirmed there in 1947. He graduated from New Richmond High School in 1951. In 1956 he was drafted into the Navy and served 20 months. He did his basic training at Naval Station Great Lakes; was stationed at Naval Air Station Patuxent River, MD as a flight line firefighter; and completed his service aboard the USS Neosho, earning his shellback certificate for crossing below the equator and visiting such places as Guantanamo Bay Naval Base and the Canary Islands off of Africa. Other than those 20 months, he farmed his entire life until his retirement.

In 1963, Don married Mary Edith Arnquist, a registered nurse from Glenwood City, WI. They raised their children Barb and Mark on the farm in Emerald, WI which Don owned and managed with his brother Jim Eliason, Sr.

Don enjoyed family time when the evening chores were done. Baseball or mini-bike rides and bowls of ice cream in the front yard in the summer and listening to the Brewers games. Board games or ice skating on the pond (and more bowls of ice cream) in the winter, then watching the Packers games. Mary got him off the farm occasionally to visit the North Shore, San Francisco, Virginia, and Florida.

When he retired from farming, Don just really enjoyed the simple things: jigsaw puzzles, feeding the birds, sitting in the sunshine, burning brush, reading the Bible, and fried chicken and potato salad.

Don was preceded in death by his parents; his wife of 40 years Mary Edith (Arnquist) Eliason; his late in life companion Joyce Goodrich; his sister-in-law Jeannette (Herold) Eliason and brother-in-law Wallace Otto.

He is survived by his older siblings Maxine M. Otto and James W. Eliason Sr; his children Barbara (Paul) Durand and Mark (Heidi) Eliason; grandchildren Ella and Jedidiah Durand and Myah Eliason; nieces and nephews Carmen (Mark) Wabbe, Douglas Otto, LuAnn (Greg) Frederickson, Martha (Peter) Eckerline, Karyn (Michael) Schuler, Jim (Barb) Eliason Jr. and their children Anaka and Landen Eliason; his brother in all but blood Louis (Kathleen) Hastert; and the many members of the Goodrich family who were a support to him until the end.