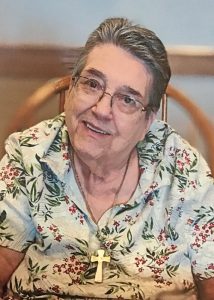 Darlene J. Nelson, 88, from Glenwood City, died peacefully at Comforts of Home in Menomonie on October 19, 2021.  She was born in Ithaca, WI on June 16, 1933 to Clifford and Eleanor (Konz) Cottrill.  The family later moved to Mauston, WI where Darlene graduated from Madonna High School in 1951.  After high school she was employed as an operator for General Telephone where she met Louis D. (Don) Nelson whom she married on February 5, 1955 at St. Patrick’s Church in Mauston.

Darlene spent the majority of her life being a mom to her ten children.  Later she enjoyed being a grandma, a great-grandma and recently a great great-grandma. Darlene was a member of St. John the Baptist Catholic Church in Glenwood City.  She collected salt and pepper shakers and spent time crocheting and doing craft projects, putting together puzzles, playing Bingo and was always up for a game of cards even though she claimed that “there are no friends in cards.”

Visitation will be held on Sunday, October 24 from 4:00-7:00 p.m. at the Anderson Funeral Home in Glenwood City.  Mass of Christian Burial will be held on Monday, October 25 at 11:00 a.m. at St. John the Baptist Catholic Church in Glenwood City with Fr. Jim Brinkman officiating.  Burial will be in the church cemetery.  Pallbearers for the service will be Darlene’s six sons.