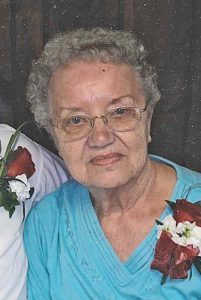 Lyla was born on January 1, 1931, in rural Mondovi, WI, Dover Township in Buffalo County, to Clarence and Clara (Hoff) Rognholt, along with her twin brother Lyman.

Lyla was raised in a farming family that totaled 11 children, which included 5 brothers and 5 sisters who have all preceded her in death.

Lyla married Myron Marlett in Glenwood City on June 9, 1950, at Our Savior’s Lutheran Church. They were blessed with the births of daughter Cathy in 1952 and Randy in 1954. Together, they farmed north of Glenwood City. The family moved to Wilson, WI in 1955.

Lyla began her working career when she became employed at Sanna Dairies in Menomonie, WI, on October 19, 1956. She worked on a production line that packaged the Swiss Miss hot cocoa and Sanalac powdered milk products for the first couple years and then went to work in the lab as a Lab Technician for the next 34 years. After 36 years, she retired on December 31, 1992. She was known to be a dedicated, loyal and hardworking employee of the then known company of Beatrice Hunt-Wesson.

Lyla enjoyed gardening, snowmobiling with family, taking trips in their camper, which included several trips to Branson, Missouri, and above all, dancing to old time music with her husband Myron. In later years, Lyla and Myron became members of Christ Lutheran Church in Menomonie.

Lyla was preceded in death by husband Myron, all 10 of her brothers and sisters, and parents Clarence and Clara Rognholt.

Private burial will be held at a later date at Mound Cemetery in Downing, WI.

**Note: The church has a mandatory mask mandate.

Cremation Society of Wisconsin, Altoona is assisting the family with arrangements. Online condolences may be shared at www.cremationsociety-wi.com.