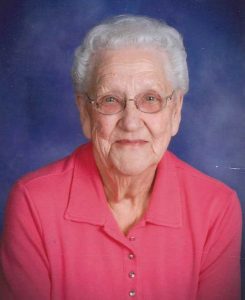 Amie L. Dobbs, age 101 of Menomonie passed away on Thursday, October 14, 2021 at Our House Senior Living in Menomonie.  She was born in Ridgeland, WI on July 8, 1920 to Herman and Minnie (nee Gilberts) Berg and graduated from Prairie Farm High School in 1939.

She married Philip Froiland in 1942, he passed away in 1964.  Amie worked 20 some years at the Farmer’s Stores, she was the secretary and treasurer at Colfax Lutheran Church for 10 years and the head cook at Colfax High School.  Amie started bowling with the senior’s League, traveling around the states and winning many trophies.  Baking Lefse until she was 95, Amie was known as the Lefse Queen.  In 1966, Amie married Charles “Bill” Dobbs.  He passed away in 2001.

Funeral services will be held at 11:00 a.m. on Monday, October 25, 2021 at Colfax Lutheran Church, 600 Balsam St., with Pastor Bob Schoenknecht officiating.  Visitation will be held 1 hr. prior.  Burial will take place at Evergreen Cemetery, Colfax.

Stokes, Prock & Mundt Funeral Chapel, Altoona is assisting the family with arrangements.  Online condolences may be shared at www.stokesprockandmundt.com.