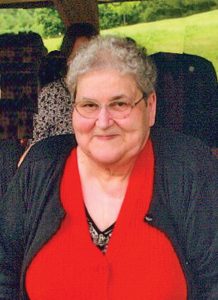 Sharon was born June 27, 1945 to Albert and Vera (Bible) Larson in Menomonie, Wisconsin. She grew up in Downing, Wisconsin and attended Glenwood City Schools. She graduated with the Class of 1963.

Sharon married Richard Butler on December 29, 1962. They farmed together until retiring with pride. She was a quiet woman but every once in a while, she had these one liners that would make everyone smile. Her family was her pride and joy. Besides taking care of and raising her family, she raised a garden, went hunting and milked a lot of cows. She also babysat for many other family members and neighbors. In later years she enjoyed visiting and playing cards with her family, reading and playing games on her tablet. She loved her weekly gatherings with her family going out for lunch and playing Skip-bo. `

Visitation will be from 4-7 p.m. on Tuesday, July 20 at Keehr Funeral Home, Spring Valley and also at church one hour prior to the service on Wednesday.

Burial will be in the church cemetery.