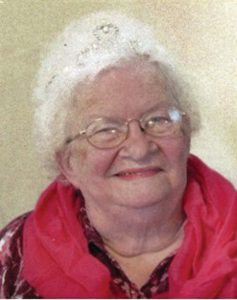 She was born April 17th, 1935, in Emerald, WI. She married Ernest C. Kiekhoefer on October 20th, 1951. They were married 67 years upon his death in 2018. Mary was a full time homemaker and was known for her “Sunday Chicken Dinners” by her children, and a “Cookie Jar full of Cookies” by her grandchildren.

Mary is preceeded in death by her parents, Stanley and Anne (Jensen) Clemmens, her husband, sisters Linda Clemmens and Betty Hurtgen, and 1 great-grandson.

A private burial will be at the Greenwood Cemetery in Emerald, WI.