BOYCEVILLE — Peter Score, a representative for the Town of Sheridan, has been elected as chair of the Boyceville Community Ambulance District Board on a vote of six to one.

Score was elected as chair during a special meeting of the ambulance district board held April 21 at the ambulance station in Boyceville.

Prior to the election, Score also was approved by the board to be the temporary chair of the meeting.

The agenda contained one action item — the election of a chair — and when Score opened up the nominations, he was nominated and accepted the nomination.

As Score was asking if there were more nominations, latecomers to the meeting, which started at 7 p.m., nominated Jeff Carlsrud, representative for the Town of New Haven.

The members of the Boyceville ambulance district board include the Village of Boyceville and the Towns of Sheridan, New Haven, Stanton, Tiffany, Sherman and Hay River.

Although some of the member municipalities had more than one person representing the municipality at the meeting, each municipality could contribute just one vote toward the election of the chair.

After no other nominations were offered, and Score started to close the nominations, one board member noted there had not been a second for Carlsrud’s nomination.

According to “Robert’s Rules of Order,” a second is not required for nominations to elect officers, Score said.

After the nominations were closed, Valerie Windsor, clerk for the ambulance district, distributed pieces of paper so the representatives could vote by ballot.

One board member noted that the ambulance district’s bylaws had not been updated since 2012 and that the board should consider updating them.

The bylaws also stipulate a vice-chair should be elected for the ambulance district board, he said.

Score and several other board members pointed out that the bylaws and the election of a vice-chair would have to wait for another meeting since neither item was included on the agenda.

During the special meeting, the ambulance district board also asked Wayne Dow, ambulance service director, to give an update on the service.

Over the past week, since Dow started working as the ambulance service director, Boyceville has gone out on seven calls, Dow reported.

The day before Dow started as the director, 15 Emergency Medical Technicians resigned because they said the board had not listened to them and had not hired the director they wanted.

The Boyceville ambulance service is working with a limited crew of eight EMTs, and for now, is relying on help from the  Glenwood City, Colfax, Menomonie and Dallas ambulance services when necessary.

Out of the seven calls, four patients were transported by Boyceville, and one was transported with an assist from Menomonie since Dow had gone out on the call alone.

The current temporary protocol for the Boyceville ambulance service is if there only one EMT available, the EMT goes out on the call to provide first aid and requests assistance from one of the neighboring ambulance services.

Two of the seven calls were for a stand-by at fires, and out of those two calls, Dow responded alone for one and the other call had two EMTs who responded.

Dow grew up in Boyceville and is a retired paramedic who served with Dubuque Fire and Rescue in Dubuque, Iowa, for 24 years. He served for 14 years as the EMS supervisor and the ambulance service director.

Re-staffing the Boyceville ambulance service will be “a long haul,” and more defined coverage agreements are needed, he said.

Boyceville is a fully-staffed 24-hour service.

According to a letter dated April 23 to the Tribune Press Reporter from Denny Klass, Menomonie fire chief, “As part of the agreement, Menomonie Fire Department will bill the Boyceville Community Ambulance District $500 for each response made into their jurisdiction. That fee covers the cost of off-duty replacement personnel required to staff another ambulance in Menomonie’s jurisdiction. Menomonie Fire Department also will be responsible for billing the patient per our billing procedures.”

[Please see the Letters to the Editor in this edition for the complete text of Klass’s letter.]

The computer software being used by the Boyceville ambulance service allows Dow access to a variety of information that he will be able to use to see how the service has been doing and to find areas for improvement.

The average response time for the Boyceville ambulance service is 11 minutes and five seconds, with 41 percent of those response times being less than eight minutes, Dow reported.

Response time is especially important for critical conditions such as heart attacks, strokes and bleeding, he noted.

The average on-scene time for the Boyceville ambulance service is 34 minutes and 15 seconds, with 47 percent of the runs being under 30 minutes on scene, Dow said.

On-scene time for one run, which was in the 90th percentile, was 53 minutes and 36 seconds, he noted.

The amount of on-scene time for Boyceville EMTs is one area in which Dow said he would like to make improvement. 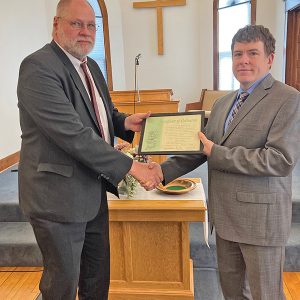 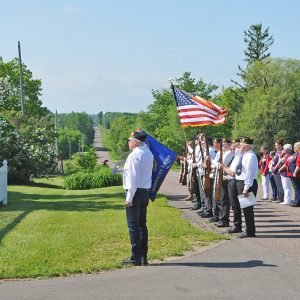