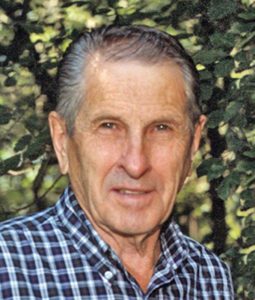 Raphael Robert “Bob” Kahler, age 95, passed away at his home from Congestive Heart Failure on Monday, February 8, 2021. Robert was born one of nine children to parents Andrew J. Kahler and Abigail (Hines) Kahler on March 10, 1925. He was born in Castle Rock, MN. The family farmed in the Spring Valley and Roberts areas. Then, in 1934, Andrew purchased the family farm in Emerald, where they stayed for the entirety of Bob’s life. He helped his parents’ farm and would later take it over himself in March of 1945 until January of 1947. Bob served in the Army in World War II. Most of his time was spent on different ships and places working as a diesel mechanic on ship engines. He was also in the Philippines, South Korea, and various other locations. Upon returning home, he went back to the family farm and started hauling milk for the Downing Creamery.

He would meet and later marry the love of his life, Betty Lou Harer, on Christmas Eve of 1957. Together the couple had two children, Bradley and Roxanne. Bob loved the family farm and worked hard on it. He always had a helping hand for anyone who asked; and had peace and calmness about him with a big heart. His blue eyes would always sparkle when he would joke around with someone. In 1986 until 2000, he worked at Andersen Windows in Bayport, MN.

Robert always kept busy by finding things to work on and do around the farm. Even in his later years you could find him climbing up on one of his John Deere tractors still trying to get work done. He loved being outdoors mowing the lawn and working in the garden. Always staying busy… He liked going to farm auctions to see what he could find; it was like a treasure hunt for him! Robert also loved to read the newspapers and keep well informed. Friday and Saturday nights he liked to sit and watch wrestling on TV with his son, Brad. They had many special moments together. Roxanne loved to cook with him; Bob always had a way of making meals memorable. In his later years, he loved to sit and watch the birds on his deck. He could name all of them, and especially loved the Pileated Woodpecker. He had a kind heart for all of the cats that would find their way to his doorstep. His grandchildren and great-grandchildren made those blue eyes sparkle with love. They meant the world to him.

A Mass of Christian Burial for Bob is scheduled for 1:00 P.M, May 8, 2021 at St. Patrick’s Catholic Church of Erin Prairie, WI, 1880 Cty. Rd. G, New Richmond, WI 54017, with Interment alongside his wife in the St. Patrick’s Cemetery to follow. A Memorial Gathering in Bob’s honor was also held from 4:00-7:00 P.M, Friday, February 19, 2021 at the O’Connell Family Funeral Home in Baldwin, WI. For additional information, please contact O’Connell’s at 715-684-3434, or email at baldwin@oconnellfuneralhomes.com. Memorials for Bob’s family may be sent to: O’Connell Family Funeral Home, Care of Robert Kahler Family, 1010 Newton St. Baldwin, WI 54002, to be forwarded on your behalf.