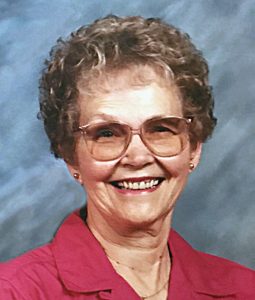 Patricia Dorwin, age 93, of Baldwin, died March 13, 2021, in Birch Haven Assisted Living. Born on July 16, 1927, Shirley Patricia Irene Booth, was the eighth of ten children to Curtis and Anna Booth in Glenwood City Wisconsin. After graduating from Glenwood City High School, Pat went on for a very short stint at the University of Wisconsin Madison. While out dancing one night in 1945, she would meet the love of her life, Robert ‘Lee’ Dorwin. The two would be married June 4, 1947 at the Glenwood City Methodist Church. Though Pat worked a number of jobs over the years, she lived to be a farmers wife, a mother to her five kids, Peggy, Deborah, Richard, Bradley, Michael, and grandma to her 9 grandchildren and 17 great-grandchildren.

Pat was always very busy, aside from life on the farm, and her large family, Pat was a member of the Homemakers Club, 4-H Leader, a bible and Sunday school teacher, Presbyterian session member, volunteer at the church, the hospital, and Treasures store. She also helped with the American Heart Association, Cancer society, and Easter Seals. Pat and Lee enjoyed traveling together. Not only have they visited many U.S. states; they also traveled to Germany, Norway, Sweden, Denmark, England, Ireland and Scotland.

Pat was very well known as a giving friend. She enjoyed baking cookies, lemon bars, brownies, hot dish, and her amazing apple pie. In later years, Pat could be found enjoying counted cross-stitch, reading, and word puzzles. She also would write letters and send cards for every occasion to her grandkids in college, get-well letters, birthdays, and sympathy. Pat was a gracious, caring, prayer warrior who loved her family deeply. Always making holidays great, entertaining was a true skill she gave to others.

A Memorial Service for Patricia took place Monday, March 22nd, at the First Presbyterian Church in Baldwin with visitation one hour prior.

Services entrusted to the O’Connell family Funeral Home of Baldwin.