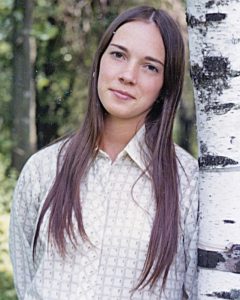 Lynnette P. Murray, 63, passed away peacefully on March 9, 2021, at her residence in Menomonie, WI, with family by her side.  Lynnette Patrice Peterson was born on May 4, 1957, to Jerry and Audrey (Walker) Peterson of Colfax.  She was the youngest of six children, though she met a long-lost half-sister just days before she passed away.  In school, she was the life of the party, and a member of the Pom Pom Squad, graduating from Colfax High School in 1975.

Lynne was strong, stubborn, and quick-witted. She was quite the prankster.  At every doctor appointment, when asked if she wore hearing aids, she’d reply, “What?”, they would repeat the question, and she would say, “Pardon?”  It was around this point they realized she was messing with them.  Lynne married three times because she said she couldn’t help it if everyone wanted to marry her. That was the kind of humor she was known for.

Lynne was well known as a great cook.  She loved making big dinners, baking, and preparing little dessert treats, and delivering them to friends and neighbors.  She was a homemaker for most of her life, but did work at CableVision, Best Western, opened Hometown Cafe in Colfax, McMillan, American Red Cross, and Fleet Farm making and entertaining friends along the way.  She was a member of the Colfax and Menomonie Kiwanis Clubs and volunteered at Stepping Stones of Dunn County.  Lynne’s proudest accomplishments were her children and grandchildren.  She knew hers were the best, and there was no telling her otherwise.  She absolutely adored her five grandchildren.

Lynne’s favorite things were anything to do with plants, flowers, and gardens.  She could spend hours at a greenhouse and would holler across the whole place for us to come “look at this”.  She always kept her bird feeders filled, and thought nothing weird of rooting around pruning waiting room plants. In fact, she traveled with a shovel and totes in her vehicle at all times in case there was an emergency plant harvesting opportunity.  She loved listening to music, collecting antiques, rocks, and anything to do with pigs.  She liked pretty little containers, cookbooks, and never met a wicker basket she didn’t take home.

Our mother instilled the importance of family traditions and the fun of celebrating holidays.  She taught us how to make her Gramma Bessie’s donuts, her mother’s cranberry sauce, and recently lefse.  She even dressed festively for every holiday.

Lynne struggled with health for the past 10 years, and it recently progressed to bone marrow cancer.  She knew when to be strong and fight, and she knew when it was time to rest.  Her final wishes were to be at home and to pass away peacefully in her sleep holding hands with her family, and that’s exactly what she did.

She is survived by her spouse, Thomas Murray of Dallas, WI, daughters: Audra (Patrick) Higbie of Colfax, WI, and Amber Gaddy (Scott Anderson) of Martell, WI, step-sons Jordan, and Zach Murray, of Anoka, MN, grandchildren:  Hannah Llewellyn and Alivia Anderson of Martell, WI, and Adia, John, and Ella Higbie of Colfax, WI, her sisters: Cindy (Dan) Ziegler of Eau Claire, WI, Nancy (Rick) Hainstock of Colfax, WI, and Lois (Jim) Goodnature of Albert Lee, MN, and many cousins, nieces, and nephews. She is preceded in death by her parents Jerry and Audrey, and her brothers, Larry, Bob, and Bill Peterson.

A walk-through visitation will take place on Friday, March 26th, 2021 between 3 and 6 pm at the Sampson Funeral Home: 1017 Railroad Ave, Colfax, WI 54730.  A private family funeral service will take place. Inurnment will be held at a later date at Evergreen Cemetery in Colfax, WI.