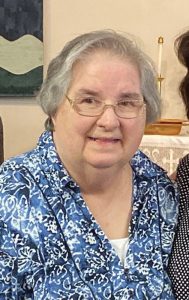 Karen Ann (Buechler) Wienke, 79, of Baldwin, WI. (formerly of Glenwood City, WI) died on March 17, 2021 at Regions Medical Center in St. Paul, MN, from complications due to a fall.

Karen was born to parents Adolph John “AJ” and Eleanor (O’Neil) Buechler on January 13, 1942 in Minneapolis, MN. She was the youngest of four born to Adolph and Eleanor prior to his service the war, with four additional siblings following after the war.

Karen graduated from Edison High School in 1961, following graduation she went to work at Honeywell before meeting her future husband. Karen met Donald Wienke in 1964, after traveling to Wisconsin with her cousin Diane (O’Neil) Jones. They later married on May 8, 1965 in Columbia Heights, MN. Karen and Donald moved to Boyceville, WI where they welcomed Cherri in 1974. In 1976, the family of three moved to the Wienke homestead outside Glenwood City, WI and in 1977, they completed their family with the birth of their daughter Deborah. Karen loved being a stay at home wife and mother to Cherri and Deborah. She enjoyed baking, cooking, gardening, and visiting family and friends.

After Donald died in 1997, Karen re-entered the workforce after a 30 year hiatus. She moved to Menomonie, WI and worked in the cafeteria at the Walmart Distribution Center for 9 years. In 2006, she moved to Baldwin, WI and started working at the St. Croix County Resource Center before officially retiring in 2009. Upon her retirement, she enjoyed reading, playing cards, collecting keepsakes, listening to music, and attending her grandchildren’s events.In 2015 Karen was diagnosed with breast cancer and successfully underwent a mastectomy and radiation. Karen became an even bigger supporter of breast cancer after her diagnosis and she was typically found wearing pink. Karen was a devoted, wife, mother, sister, and friend.

Mass of Christian burial will be held at 11:00 a.m. Thursday, March 25, 2021 at St. John the Baptist Catholic Church in Glenwood City with Father John Long as celebrant. Interment of cremains will be in the church cemetery. Friends may call at the Anderson Funeral Home in Glenwood City on Wednesday, March 24, 2021 from 4:30 to 8 p.m. and one hour prior to services Thursday. Due to covid we are still limited in numbers for the service and distance requirements and masks.

Anderson Funeral Home in Glenwood City is serving the family. To share a memory, please visit obituaries at www.andersonfuneralhomegcwi.com