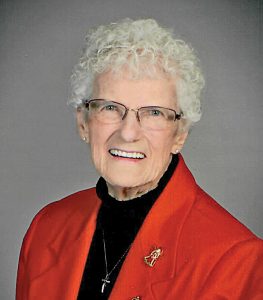 Gladys Otilia Berg passed away peacefully at home on March 17, 2021, with her loving husband and children by her side. She was born November 14, 1928, in Sand Creek, Wisconsin to Guy and Mina (Myran) Jenson. The family moved to a farm east of Colfax in 1936. She attended 18-Mile Creek School and graduated from Colfax High School in 1946.

After graduation, Gladys worked in St. Paul at a stationery store, at the phone companies in Eau Claire and Colfax before finding her passion in healthcare, first working at St. Joseph Hospital in Chippewa Falls, then as a nursing assistant at the Bloomer Maplewood Nursing Home before continuing her education in Physical Therapy and was a therapy aide at Bloomer. In 1974, she received her LPN license from Chippewa Valley Technical College and worked as an aid supervisor for the State of Wisconsin at Northern Center until she retired in 1990.

Gladys married Hjalmer Lind of Colfax in 1949 and, together, they raised 4 children on their homestead farm. They were able to celebrate their 50th wedding anniversary before Hjalmer passed away in 2000. She reconnected with Hjalmer’s cousin, Francis Knutson, of Amery. They were married in 2001, and Francis joined Gladys on the homestead farm until he passed away suddenly in 2012. And she was lucky enough to find another wonderful man in Henry Berg. They were married in 2016, and Gladys moved off the farm where she had lived for 67 years to join Henry at his home in Sand Creek.

Gladys enjoyed many interests and hobbies including cooking, baking, sewing, knitting, embroidering, rosemaling, watching sports, jigsaw puzzling, traveling. She was a member of the Colfax Lutheran Church since 1936 and, in recent years, of New Hope Lutheran in Sand Creek. She was also a member of the Town of Howard Auxiliary and the American Legion Auxiliary in Colfax. She made three trips to Norway (1980, 1987, 2013) and was very proud of her Norwegian heritage. Every year she made all the traditional Norwegian food for the holidays. Most of all, she enjoyed each and every minute she spent with family, friends, neighbors and so many she met along her life’s path.

Arrangements are being handled by Olson Funeral Home in Bloomer. Visit olsonfuneralhomebloomer.com to leave online condolences.