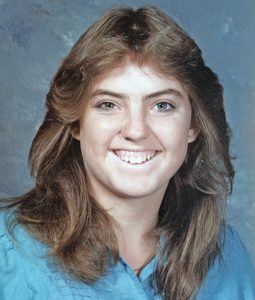 Pam was born July 9, 1967, to Judith A (Booth) Klatt and Richard Gates in St Paul, MN. Shortly after her birth, the family moved to Phoenix, AZ. She went to grade school, in Phoenix, AZ. The family moved to San Angelo, TX in 1980 where she finished High School. The family then moved back to Glenwood City in 1986. She lived in Glenwood City until she moved to the Twin Cities area where Pam gave birth to her son, Robert Yunker then moved to North Dakota. Robert gave her a grandson, Hayden Yunker. Pam moved back to Glenwood City in 2018. Pam worked at Cenex in Glenwood City until she could no longer work. Pam was diagnosed with uterine cancer in June 2019. Pam was a strong person; until she lost her courageous battle with cancer.

Pam was a caring and loving person, her pride and joy were her son; Robert and her grandson, Hayden. She loved spending time with them and family.

Visitation for friends will be held at the at the United Methodist Church, 219 Tainter Street in Downing, WI from 4:00 – 5:00 p.m. on Friday, March 26, 2021 and the funeral service following at 5:00 p.m. with Mike Scalze officiating. Memorials are preferred at the discretion of the family. Funeral and cremation services entrusted to Countryside Crematory and O’Connell Family Funeral Home of Baldwin.