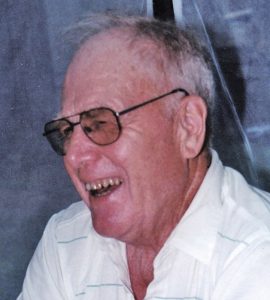 He passed away on March 8th; a victim of old age, Covid-19 and pneumonia.

Gaylord enjoyed the smell of fresh cut hay, flat fields, spending time in the woods cutting firewood, bowling, having breakfast on Monday mornings with friends and meeting his brothers and sisters for lunch each month at Menomonie Family Restaurant. He split logs by hand until he was 90 years old.

He graduated from Boyceville High School in 1944 and went to work at Lakeside Aluminum Company in Menomonie.  In 1948 he married Betty Mae Hanson; they moved to a farm not far from his birthplace near Clear Lake.  A long driveway, harsh winters and an outhouse best characterized those years.  Five children were born to Gaylord and Betty in that tiny house: Linda, Gary, Karen, LuAnn and Galen.

From 1954 to 1974 Gaylord and his family established and lived on Best Valley Dairy Farm near Downing Wisconsin. He served on the Best Valley School Board.  Their daughter Terri was born there.

Gaylord was active in the Boyceville Area Sno-Jammer’s Snowmobile Club and bowled for many years on the Trojan Seed Corn bowling team.

Gaylord had a home near Minong, Wisconsin; he and Betty spent many happy summers there.

In 1974 Gaylord and Betty sold Best Valley Dairy Farm and moved to Boyceville.  That same year Gaylord went to work for Nor-Lake Corporation in Hudson, Wisconsin.  He reveled in the fact that there were no barn chores to do when he came home.  He retired from Nor-Lake in 1989.

Gaylord believed in being active in the community. He was a volunteer fireman for the Village of Boyceville for 26 years and served two terms as a Trustee on the Village board.  He served numerous times as a Trustee for St. John’s Lutheran church.

He was proud to be a blood donor for the American Red Cross and in 2014 received his 20-gallon pin.

Gaylord liked to keep active and worked summers for Piney Point Resort and Shady Lane Resort on Gull Lake near Springbrook, WI until the resort was sold in 2006.

Services will be held  1:00 p.m. Saturday, May 1, 2021, at the United Methodist Church in Boyceville with Pastor Shannon Mattison. Visitation will be from 11 to 1 at the church. Interment of cremains at 4 p.m. West Akers Lutheran Cemetery  New Haven Twp. WI.