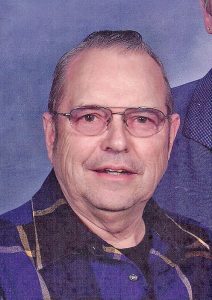 Robert Murry Larson, Jr. was born March 24, 1937, to Robert M. Sr., and Florence (Logan) Larson in New Richmond, WI. He spent his younger years in New Richmond, then at age 12, the family moved to the Twin Cities.

Bob graduated from Mounds View High School in 1956. He made a career as a tower crane operator, working for many different construction companies and was a member of the Local 49 operating engineers. A big highlight was operating the crane on top of the IDS Building in Minneapolis, MN.

Bob married Carole (Paulson) Larson on August 24, 1963 and they made their home in St. Paul, MN, where they had 2 children Jeff and Valerie. In 1971, they moved to Emerald, WI, where they still reside.

Bob and Carole enjoyed collecting and together opened an antique shop at their home. They also had fun doing antique mall shows in the Twin Cities and selling in several different shops over the years. When Bob retired in 1983, they liked going to garage sales and taking many road trips around the country and sometimes doing shows and camping as they traveled. At the shows, he was known as “The Tool Man”. Bob was a member of First Lutheran Church, Clear Lake, WI where he and Carole were both confirmed. He lived life to the fullest and loved having fun and spending time with family and friends.

He is survived by his wife: Carole (Paulson) Larson; children: Jeff (Lardy) Larson and Valerie (Larson) Cipra; grandchildren: Heather Swanson, Kalee Cipra, Nathan Cipra, Shawnna Paulson; great-grandson: Dean Murry Cipra; sisters: Judi Desmond & Janet (Derry) Monson; sisters-in-law: Cindy Paulson & Terry (Paulson) Dowell; along with Nieces, Nephews and many other kids that called and thought of him as Grandpa; as well as many other relatives and friends.

Bob’s Memorial Service will be held on Saturday, March 13th at First Lutheran Church in Clear Lake, WI. Visitation at church from 11-1 p.m. and funeral begins at 1 p.m.