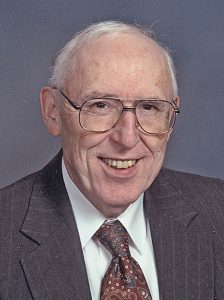 Joseph Gary Alms, age 83, of Hudson, died March 1st, 2021, at his residence with his family by his side. Born on April 29, 1937, in Cady Township, Joe was the son of Christian and Leona (Miller) Alms. He was raised in rural Spring Valley and graduated from Spring Valley High School in 1955. Joe enlisted in the United States Navy, serving for two years at Quonset Point, Rhode Island. He then completed his Bachelors Degree in Music Education at Wisconsin State College-River Falls.

On April 9, 1960, he married Carol Reed. The couple moved to Colfax, Wisconsin in 1961, where Joe taught music in the public school for 35 years. He earned his Masters in Education from the University of Wisconsin-Eau Claire in 1969. Joe was also a leader in the musical life of the community, directing choirs and instrumental ensembles in church, singing in Barbershop groups, and playing trombone in various ensembles, including the Ludington Guard Band in Menomonie. He also enjoyed playing and singing with Chuck and Friends, a small group that brought musical joy to residents in many nursing homes in the area.

Joe also had a deep love for the natural world. He enjoyed fishing and bird watching, and later cultivated flowers, especially roses. In 2006, Joe and Carol moved to Hudson, where he lived until his passing.

He is preceded in death by his siblings Robert (Naoma) Alms, Donna Alms, Elizabeth (Donald) Lee, and brother-in-law Ervin Podoll.

A private live-streamed memorial service will be held at 2:00 p.m., Thursday, March 11. Interment will be in the Willow River Cemetery in Hudson. Memorials will be used to help support the charities that were close to Joe’s heart. Memorial and cremation services are being handled by the O’Connell Family Funeral Home of Hudson.