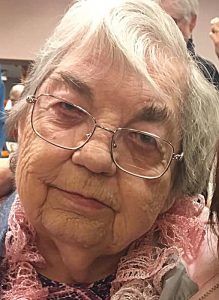 Doris was born on May 3, 1925 to Jim and Alice (Tronrud) Newville in New Haven Township, Dunn County, Wisconsin. Doris graduated from Clear Lake High School. In 1944, she married Phil Herdahl and they farmed on the home Herdahl farm near Connorsville. Where they raised their family. They later moved to the Downsville area where they lived for twenty years before returning to Boyceville.

Doris worked at Schultz Brother’s Department Store and at 3M in Menomonie. She then traveled extensively for fifteen years while selling ads for the Lutheran Digest Magazine. She was active at Grace Lutheran Church in Connorsville, Little Elk Creek near Downsville and at Trinity Lutheran Church in Boyceville.

Doris and Phil enjoyed their travels to Norway England. In 1960 Doris and Phil founded the Connorsville Comets 4-H club and it remains one of the oldest and most active clubs in Dunn County. She was also active in the Dunn County Homemakers.

She and Phil spent twenty-seven winters in the Rio Grande Valley of Texas. She was a good friend to many and always kind, caring and willing to help neighbors in need.

Due to Covid restrictions, numbers were limited to fifty.

Anderson Funeral Home in Glenwood City is assisting the family.