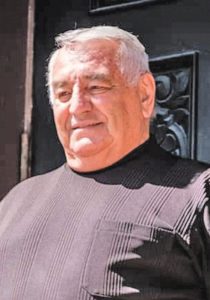 Wes was born March 3, 1944, in Amery, WI, to Leonard and Alma (Carlsrud) Tuttle of Glenwood City.

He attended school in Glenwood City where he graduated, later graduating from the Techney Seminary in Chicago, IL.

Wes served in the United States Air Force from 1966 to 1970. During this time he met the love of his life, Alice Engebretson and they were married March 29, 1969. Three weeks after their marriage he was deployed to Vietnam. After his discharge Wes returned to school and recceived an Associated Degree in Business Administration from Chippewa Valley Technical College in River Falls.

They purchased the family farm where he farmed for 30 years. During this time Wes fulfilled his lifelong dream of becoming ordained as a Deacon for St. John the Baptist Catholic Church in Glenwood City. He served in that capacity for over 27 years. He was privileged to have touched the lives of so many through baptisms, first communions, confirmations, weddings, and burials. Wes was a man of the people and honored to be part of the congregation.

Wes was always looking to furthering his education. While in his sixties, he obtained his Bachelor of Arts Degree in Theology from St. Joseph’s College of Maine.

Wes is preceded in death by his parents Leonard and Alma and brother Peter.

Mass of Christian Burial will be held 1:00 p.m. Thursday, January 28, 2021, at St. John the Baptist Catholic Church with the most Reverend James Power presiding. Concelebrants will be the priests of the dioceses of Superior. Burial will be in the church cemetery. Due to Covid-19 a visitation will be held on Thursday, January 28, from 10 a.m. to 1 p.m. in the St. John’s school gymnasium. Services may viewed on the church website located or through the church facebook page.