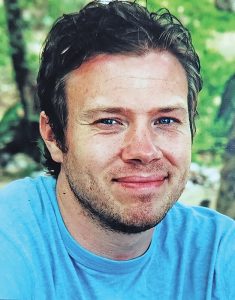 Dominic graduated from Boyceville High School and went on to serve the United States Air Force as a tactical aircraft maintenance journeyman for four years. During his active duty, he distinguished himself for outstanding non-combat meritorious service, exceptional dedication and strong work ethic. Dominic went on to study at the University of Wisconsin-Milwaukee and graduated Magna Cum Laude with a degree in Engineering. Dominic worked at the U.S. Air Force throughout his career, most recently as a civilian engineer at the 773rd Civil Engineer Squadron at the Joint Base Elmendorf-Richardson in Anchorage, Alaska. He will be remembered by his colleagues with his quiet nature, dedication, and a brilliant engineer.

Dominic married Cherry Narvasa on October 29, 2011, in Glenwood City, Wisconsin. They resided in Anchorage, Alaska with their two young children, two dogs, and chickens. Dominic was a devoted father and husband, whose greatest joy was spending time with his family and caring for his children. He loved the outdoors, running, hiking, camping, hunting, and fishing. He loved traveling and liked to plan the next adventure with his family. He was a loving son, brother, uncle, friend, and colleague. Dominic’s siblings will hold dear many of his precious memories including playing board games/cards, camping trips to Lake Superior, and playing his guitar. He had the biggest smile, had a friendly sense of humor, never cut down on anybody, and never talked badly about people.

Dominic will be sorely missed by his wife, Cherry and their children Grant and Willow. His son, Grant will always remember his father as someone who never judged people by their color or if they were rich or poor. He was caring and gentle and treated each and everyone with dignity and respect. He remained humble despite the distinctions he earned throughout his education and career. He was soft-spoken and his fun-loving personality brought joy and comfort to those around him. He will forever hold a special place in the hearts of his father Joel and siblings: John (Liz) McGinlay, Joel Schaffan, Darla Meyer, Autumn (Troy) Berndt, Travis (Chanok) Schaffan, Hannah (Kaleb) Schad, Rosalie (Keith) Wieser, Alexio Schaffan, and Nadine Schaffan, as well as his nieces, nephews, aunts, uncles, cousins and friends. He will also be dearly missed by his in-laws in the Philippines.

He is preceded in death by his mother, Sheila Lammi, who is now holding him close in heaven.

A private mass will be held in Anchorage for Dominic. A family memorial will take place in Wisconsin this summer.