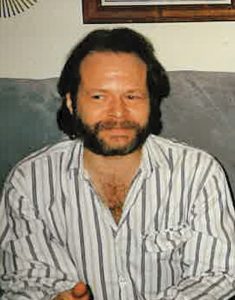 Gregory Scott Brunberg, born September 25, 1956, passed away January 6, 2021, at The Neighbors in Menomonie, WI due to COPD. He was 64 years old. Greg was born in scenic Winona, MN. He lived in Black River Falls, Waupun, Madison, Oshkosh, Waukesha, and Boyceville, Wisconsin.

Greg held many different jobs in his lifetime, including working as a design draftsman in Minneapolis, an engineer at Thermos/Halsey-Taylor in Rockford, Illinois, and a counselor at the Salvation Army in Waukesha, WI. Greg was a gifted musician/guitar player. Early in his career, he was ranked among the top three guitar players in the Minneapolis area, when he was with the City Limits Blues Band. He worked as a studio musician in Minneapolis, and sold one of his songs “Please Call Home” to Gregg Allman. This song is featured on both Gregg Allman’s “Beginnings” and “Idelwild South” releases. Greg also played with Muddy Waters’ band in Chicago.

Greg lived in Madison, WI, where he worked as a Blues Editor/writer for “Night Sites and Sounds,” an entertainment magazine. This gave him the opportunity to meet and interview his idol, B.B. King backstage at the Marcus Amphitheatre in Milwaukee, in 1992. He interviewed most of the major national Blues musicians/guitarists, including Johnny Winter, Sonny Landreth, Luther Allison, and others. In Madison, WI Greg was lead guitarist for a large R&B/Blues band, Dr. B and The Remedy. This band was booked in all the major Madison venues in the mid-‘90s.

Greg had a keen sense of humor. When he wasn’t in an active band he participated in various open jams. One time he played at the Apple Pub in Appleton, WI. The host band “gave up” the stage and let him play all night. Passersby heard him from the street and soon the venue was filled with people. One spectator insisted he was Joe Walsh and wanted his autograph. Greg, with is typical sense of humor, signed the autograph “Joe Walsh.” It was a good night.

Greg worked for the Salvation Army, at a homeless shelter in Waukesha, WI, for 7 years. He had a warm heart and was well liked by the residents. Both Greg and his mother Beverly were active members of the Salvation Army church in Waukesha. Greg used his musical talent once again, performing at the church’s worship services.

Greg was fond of animals, including his three Siamese cats, Sam, Susy, and Bill, who preceded him in death.

His is survived by Sheila Hegeman, his close friend of 40 years, his sister Debra Jackson of Avon Lake, Ohio, his brother Richard Brunberg of St. Petersburg, Florida, his nephew Matthew Brunberg (Meghann) of Winchester, Virginia, and his great nieces Alessandra Brunberg and Sophia Brunberg. He is also survived by his uncle Ronald Mueller of Winona, MN.

A memorial tribute will be held in the Spring of 2021. Friends and relatives will be notified.

Help heal the nation. Support your local Blues musicians. In memory of Greg, check out one of his favorite songs on “YOUTUBE,” including “Samba Pa Ti,” by Carlos Santana, or “The Messiah Will Come Again,” by Roy Buchanan. Donations can also be made in his name to any local Salvation Army or to Stepping Stones of Dunn County, at: https://www.steppingstonesdc.org/