TOWN OF MENOMONIE — A 24-year-old Elk Mound man became Dunn County’s first traffic fatality of 2021 when he died following a single-vehicle crash early Sunday morning in the Town of Menomonie.

The victim, John C. Quinn V (fifth), was pronounced dead at the scene by the Dunn County Medical Examiner’s office after the SUV he was driving left the roadway and struck a tree before coming to rest in a field.

The Dunn County Sheriff’s Office and Menomonie Fire Department responded to the scene. Upon arrival, deputies located an unresponsive Quinn, who was the lone occupant, in a 2008 Chevrolet Envoy SUV in the field north of CTH BB.

The preliminary investigation indicates that Quinn’s SUV was north bound on 390th Street and failed to stop for the stop sign at USH 12. The vehicle crossed USH 12 onto CTH BB, and a short time later left the roadway striking a large tree. The vehicle sustained severe front end damage from impacting the tree, and later came to rest in a cut corn field.

Mound View Elementary closed for 2 weeks due to COVID-19

Sheriffs call for Calm across the State of Wisconsin 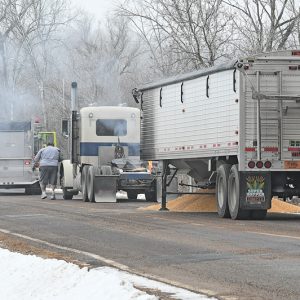