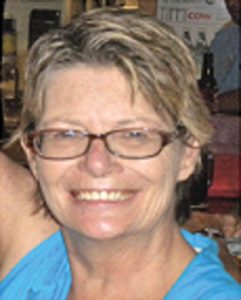 Linda was born on August 6, 1956, at St. Joseph Hospital in Chippewas Falls, WI, to Clarence and Marian (Benish) Tuschl. She married Jay Morrison on January 11, 1985. She was a very hard worker. First working at the root beer stand, bartending and then moving to Kenosha, WI, to work for American Motors building cars. She came back to Colfax to work delivering mail for the USPS. She moved with Jay to Winter, WI, and started her own buisness of embroidery shirts and hats from home. Unfortunately she had a stroke and they needed to move to a warmer climate, Arizona.

She was a wonderful, thoughtful person, loving wife, mother and grandmother. She loved playing pool, horseshoes and rooting on them Packers. “First and ten do it again”, she would scream. she was dearly loved and will be greatly missed.

A celebration of life will be held sometime in June of 2021 around Colfax, WI area.