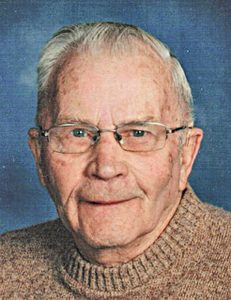 Gayle M. Tudahl, age 91, of Ridgeland, WI, died Monday, December 21st, 2020, at Mayo Clinic Health System in Menomonie. He was born February 4th, 1929, to Ludvig and Tena (Lea) Tudahl at Connorsville, WI where he was raised and attended school. He graduated from Boyceville High School in 1947 and then went to work for Armour Meats in St. Paul. He later served in the U.S. Army during the Korean War from 1951-1953. On May 8th, 1954, he was married to Beverly Olson at West Akers Lutheran Church in the Town of New Haven. They then farmed in the Connorsville area for about 3 years. Gayle went to work for the Farmer’s Union in Ridgeland in 1957 and was employed there until his retirement in 1991. After retiring he worked part time for Dunn County Waste Management and also mowed lawns and cleared snow for several neighbors and friends. He was a member of Ridgeland Lutheran Church and the Willard Hinzman American Legion Post 511 of Ridgeland. He was an active softball player for many years and enjoyed metal detecting, fishing, both summer and winter, repairing bicycles and small engines, painting, woodcarving, cutting firewood, and spending time with his grandchildren, family and friends.

Gayle was preceded in death by his parents, sister: Luella Dockter and brother: Archie Tudahl. He is survived by his wife: Beverly of Ridgeland, sons: Gary Tudahl (Lisa Avery) of Ridgeland and Bob (Jackie) Tudahl of Colfax, daughter: Sandra Tudahl of Menomonie, grandchildren: Amanda (Jason) Mincoff and Robbie Tudahl, great-grandchildren: Serena and Amara Mincoff, and Colson Tettam, as well as many nieces, nephews, other relatives and friends.

A Memorial Service for Gayle will be held in the spring. Arrangements are with Rausch-Lundeen Funeral Homes, Dallas and Cameron.