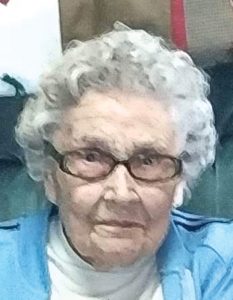 Vergene Lucille (Erickson) Viets, born March 3, 1924, passed on to Glory on December 3, 2020. Toopie was born and raised in a tar paper shack on a dairy farm in Otter Creek by her parents August and Edna Erickson.  As the middle child with 4 siblings, she was full of life and ready for adventure. It was when she was a child and feeding the chickens saying “Here toopie toopie” that she got her nickname Toops or Toopie.

She fell in love with Hollis Viets, one of her dad’s hired hands. He enlisted in the Army Air Corps and served in North Africa during WWII. When he returned after the war, they were married June 9, 1945, and her next 19 years she would describe as the most wonderful experience, traveling and living in Indiana where Michael was born, New Jersey, Illinois where Terry was born, New Mexico where Donald Byron was born, New Hampshire, France, and Virginia as an Air Force wife, seeing many new places and making many friends.

Every summer Holly and Toops and the three boys would come to the farm in Otter Creek where the family would spend their time fishing and helping her parents on a working vacation. After Holly was discharged from the Air Force in 1964, and her mother, Edna, died in 1966, Holly, Toopie and Donald Byron moved to the farm Edna had willed to them.

Toopie and Holly lived on the tree farm, which Holly called “Dunromin”, for the remainder of their lives. She was always welcoming hunters and visitors to her home, keeping active in her church and the American Legion Auxiliary. When Holly passed in ‘98 she continued to live at Dunromin. Her sons lived in Ohio, Michigan, and California, which limited their ability to check on her regularly.  Due to the watchful caring help of her trusted friend Rodney Shellito (the sons referred to him affectionately as their 4th brother), and her best friend since grade school, Victoria Hendricks, she was able to remain on the farm until 2018. She became a resident at the Colfax Health and Rehabilitation Center, where she was the life of the party.

Toopie was preceded in death by her parents August and Edna Erickson, her husband Hollis, and brothers Alvin and David. She is survived by her sisters JaVerna MorriIl, Genevieve (Penny) Noer, sons and Families:

A celebration of Toopie’s life is planned for Memorial Day weekend so she can be honored on her favorite holiday.

Sampson Funeral Services handled Toopie’s cremation and her ashes will be interred next to Holly, the love of her life, at Norton Lutheran Church Cemetery.  Instead of flowers, gifts in her memory to the charity of your choice are welcome. Thank you.