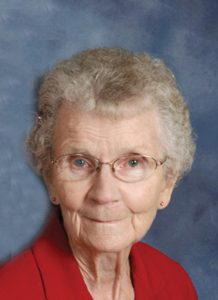 Maxine Lois (Sanford) Timm, age 90, of Glenwood City, passed away with her daughters at her side on Sunday, December 13th, 2020, at Glenhaven. She was born April 14th, 1930, the second youngest of six children, to Laurence and Sylvia (Cochran) Sanford, in the small town of Wilson, Wisconsin.

Maxine graduated from Glenwood City High School in 1947.  That same year she began working as a teller at the First State Bank in Glenwood City where she continued to work for 45 years! She retired in 1992 as the Vice-President of Operations, currently Hiawatha National Bank.

“Mac” (as many called her) met Jack, at the Grey Goose, a dance hall, in Hersey, Wisconsin. They were married at St. Matthews Church, Spring Valley, Wisconsin, on August 27th, 1949.  Together they purchased the Timm family farm in Spring Valley.  They were blessed with three children, Jan, John, and Jill. In 1957 they decided to purchase a larger farm with more acreage in Downing, Wisconsin.

Their son, John, and wife Joy, joined them in the farming operation in 1972. Maxine did the daily milking, morning and night, while always working full time at the bank.  Jack and Mac moved off the farm in 1979, building their new home within a mile. They continued to “help out” on the farm until John’s untimely death in 1997 at which time the farm was sold

Once retired, Maxine finally had more time for her hobbies including cabin life, fishing, embroidery, traveling (Hawaii, Alaska, Colorado, and Chile!), baking and, most importantly, spending time with her 25 grandchildren and great-grandchildren.  She was an active member at Holy Cross Lutheran Church. Maxine served on the Hiawatha Board of Directors for 8 years. She and Jack were honored to serve as Grand Marshals of Glenwood City in 2003. They were blessed to share 71 years of married life together!