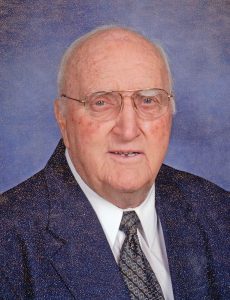 Wally was born on November 30, 1927, in Springfield Township; the son of William and Eva (Nielsen) Nelson. He was raised in rural Woodville attending Maple Grove Elementary School prior to graduating from the Woodville High School in 1946. Following this, he proudly enlisted in the armed forces. He took basic training at Aberdeen Proving Ground before being stationed in Korea for fourteen months. He served in the United States Army from 1946, the end of World War II, to 1948. Following this, he attended the University of Wisconsin River Falls that fall, but after a few months he realized he didn’t like it. He started buying cattle and founded Nelson Cattle Company. For sixty-two years, he created countless friendships in the business and became one of the most respected names in the cattle/farming communities.

On February 4, 1950, he was united in marriage to his best friend, Carolyn Hagman at St. John’s Lutheran Church in Spring Valley. This union would be blessed with children Sherry and Ron. They spent seventy years together prior to Carolyn’s death in January of 2020. Following his marriage, he became a member of Zion Lutheran to which he remained up to his death. He served on the parish council and the parish unit that helped build the church. Wally lived his life with respect, principle, and faith. In some ways, he was bigger than life, a gentle giant. Furthermore, he was a member of the American Legion Post 301 in Woodville.

Due to Covid, Wally’s family will be celebrating his life in a private setting at his church, Zion Lutheran of Woodville. Friends of the family may watch the service live on Zion’s Facebook page on Tuesday, November 17th at 1 p.m. Burial will be in the Sunset Cemetery. Military honors will be provided by the Woodville American Legion.

Funeral services have been entrusted to the O’Connell Family Funeral Home, 1010 Newton Street, Baldwin, WI 54002. In Lieu of Flowers, Memorials maybe directed to the funeral home at the address above and will be offered to the ParkView Community Campus and Zion Lutheran Church.