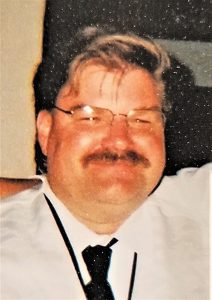 David D. Tumm, age 63 of Forest, WI, passed away on November 6, 2020, after a 9 year battle with Glioblastoma Brain Cancer at the University of MN Fairview Hospital.

David Delbert Tumm was born on May 19, 1957, in St. Paul, MN the son of Leonard and Virginia (Knudtson) Tumm. He grew up in North St. Paul, MN and attended Tartan High School. David’s family moved to Emerald, WI and he graduated from Clear Lake High School in 1975. Immediately after graduation, Dave joined the United States Army and served as a Tactical Wire Operations Specialist until he was honorably discharged in 1978. David was united in marriage to Laurie A. Graese on September 1, 1979 in Forest, WI. Together they made their home there and raised three children: Jessica, Michael and Zachary. David owned and operated Tumm Electric for many years and continued to work even during his illness. When he wasn’t working, David enjoyed bowling, billiards, gaming and travel. He will be sorely missed by his family and friends.

David is preceded in death by his mother, Virginia Tumm.

Memorial Service at 11:00 a.m. on Saturday, November 14, 2020 at Living Word Chapel in Forest, WI with a visitation an hour before at the church on Saturday.

Burial will be in the Forest Township Cemetery with Military Honors provided by the All Clear Lake Veterans Memorial Honor Guard.