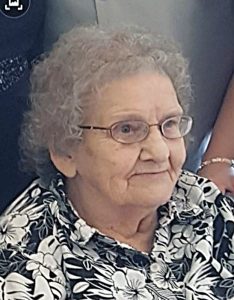 Viola Ruthie (Johnson) Kirk was born on March 22, 1928, in Knapp, WI, the daughter of Victor and Eva (Burton) Johnson. She grew up in Knapp, WI, and graduated from Boyceville High School with honors in 1946. Viola was married to Glen “Bud” Kirk on August 30, 1947. They lived on the family farm in Emerald, WI, until 1957, when they moved to their farm in Clear Lake, WI, where they farmed until 1979.

Together they raised 11 children: Sandra, Michael, Shari, Patricia, Richard, Carla, Cindy, Ronald, Peggy, Denise, and Thales. After Bud’s death in 1979, Viola moved into the Village of Clear Lake, WI. During that time, she worked several jobs, including waitress at various restaurants, baking at “Jer- Jil’s”, and a number of years at Nova Tran where she retired in 2003 at age 75.

In 2008, Viola moved to Clayton to live with her daughter and son-in-law. She lived there until May of 2017 when she was moved to Willow Ridge Healthcare facility in Amery. For the last 10 days, she was able to be at her grand-daughter’s, where she was able to rest peacefully and could be surrounded by her family and receive the many hugs and kisses needed by her.

In her spare time, Viola enjoyed dancing to polka music, bowling, playing softball, picking strawberries, playing 500 and Scrabble. She loved to cook and bake for her family and was well known for her jelly rolls, popcorn balls, chicken dumpling soup, soft cookies, and beautiful cake decorating. Viola’s favorite thing was spending time with and getting hugs from her family and grand-kids. She was also a member of the United Methodist Church in Clear Lake.

There will be a Celebration of Life Memorial Service at a later time.

Interment will be at the Greenwood Cemetery, Emerald, WI at a later time.

Scheuermann Funeral Home and Cremation Services are handling the arrangements.