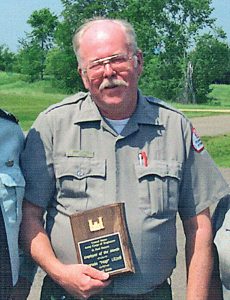 Darwin C. ‘Hap’ Litzell, age 79, of Glenwood City, Wisconsin died peacefully on Friday, October 16, 2020 at his home, with his family by his side.

Hap was born June 3, 1941 to Bernard and Eleanor (Gunderson-Dahlberg) in Rockford, Illinois. He spent his childhood in Spring Valley where he attended Spring Valley Schools, graduating with the Class of 1959. He later attended Vo-Tech in Eau Claire, Wisconsin.

On September 18, 1961, Hap married Cynthia Haugeland in California. They were blessed with 5 children: Sandra, John, Eric, Kathy and Elizabeth ‘Lizzy’.

In May of 1959 Hap entered the U.S. Navy and served for nine years. He was a proud Veteran and worked a short time for the postal service and over 20 years for the Army Corp of Engineers at the Eau Galle Dam and Recreation Area in Spring Valley. Hap also served in the Army National Guard for a number of years in the late 1980’s. He had worked for Aaby Plumbing in Woodville and Shafer Electric in Spring Valley. Hap loved to have a good time and enjoyed hunting and fishing. He loved to bowl and did so until his last year of life.

He is preceded in death by his parents; daughter Elizabeth ‘Lizzy’ Litzell; and brother Donald Litzell.