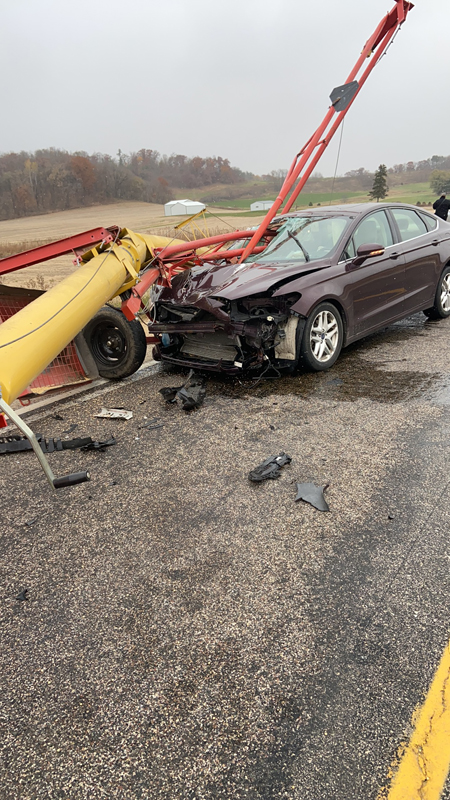 TOWN OF LUCAS — A 25-year old woman was fortunate to escape serious injury after she drove her car in to a grain auger being towed by a tractor last Monday afternoon.

On October 19, 2020, at about 2:27 p.m., the Dunn County Communications Center received a report of a car that had struck a grain auger being towed by a tractor on STH 29 near 270th St in the Town of Lucas. The Dunn County Sheriff’s Office responded to the crash. There was minor injury and road blockage.

The names of the individuals involved in the accident were not released in the sheriff’s report to the media.

The initial crash investigation shows that a 2013 Ford Fusion operated by 25-year-old female was westbound on STH 29 and came up behind a tractor pulling a 61’ grain auger (operated by a 54-year-old male) and struck the back of the auger.

The farm equipment was displaying a slow moving vehicle sign.  The driver of the car reported that her footwear interfered with her pedal operation during the crash. However, it was apparent that a contributing factor in the crash was how quickly the distance closed between the female’s vehicle traveling at highway speed and the slow moving farm vehicle.

The purpose of this press release is to remind the motoring public that the fall is a busy time for local farmers on the roads. There is a lot of extra traffic of large, slow-moving farm equipment on the roadways. Please remember that your vehicle traveling at 55 MPH will very quickly close the gap between you and a farm implement that generally operate at 15-25 MPH.

The Dunn County Sheriff’s Office would like to remind everyone that Wisconsin Statue 346.09 (3)(b) prohibits passing a farm vehicle (implement of husbandry or Ag CMV) in a no passing zone even though that vehicle is traveling less than half the posted speed limit.

The crash remains under investigation by the Dunn County Sheriff’s Office. 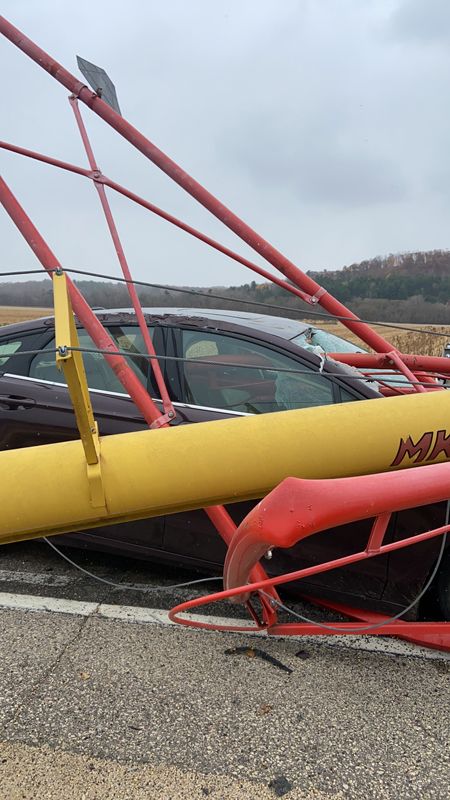