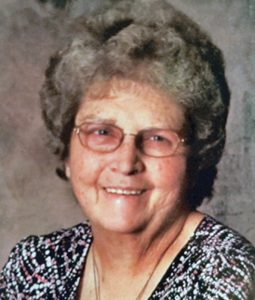 Ruth was born on November 18, 1945 to Homer and Ethel (Booth) Sedgwick in Platteville, Wisconsin. She graduated from Platteville High School in 1964, and went on to pursue an education in social work at the University of Wisconsin: Platteville. However, those plans would change when she met a handsome young man and soon-to-be farmer named Hank Hurtgen. Ruth and Hank were married on April 7, 1967, and began their farming career the next day when their recently ordered livestock arrived on the farm in Glenwood City, WI. Soon after their relocation to Glenwood City, Ruth took on the role of organist at their church, Emerald United Methodist Church, and did so for 49 years until it’s dissolution. Ruth loved her position at church; but when it came time to take on the job of “Mom,” she was ecstatic and immensely proud to hold the title three times over when she became blessed with her children: David, Pamela, and Rita. The pair raised their beloved children on the farm, while Hank continued to tend to the farm, Ruth began a catering company, aptly named Ruth Hurtgen Catering. She cultivated much success in her 32 years running the business before passing the torch to her daughter-in-law, Cindy, in 2018. The families Ruth served throughout the St. Croix Valley are beyond count. Even in her retirement, she would often ride along with Hank to make food deliveries to venues and homes all over the county.

To those who knew Ruth best, she was renowned for being generous to a fault and a true good samaritan. Her favorite way to help folks was anonymously, like a guardian angel to those in need. In her youth, she was a Girl Scout leader and continued to volunteer for the organization throughout her life. The impact Ruth’s life has made on the community can never truly be measured, but it can’t be denied that she has touched most of us in some positive way during her time with us. Though gone from our sight, her legacy and spirit will live on for generations to come. Ruth will be truly missed.

A Gathering of Family and Friends to celebrate Ruth’s life will be held from 2:00-7:00 p.m., Friday, October 9, 2020 at O’Connell Family Funeral Home, 1010 Newton St., Baldwin, WI, 715-684-3434, www.oconnellfuneralhomes.com. Interment will take place at Greenwood Cemetery in Emerald, WI at a later date. Those in attendance will be asked to wear masks and maintain safe social distances. In lieu of flowers, memorials are preferred.