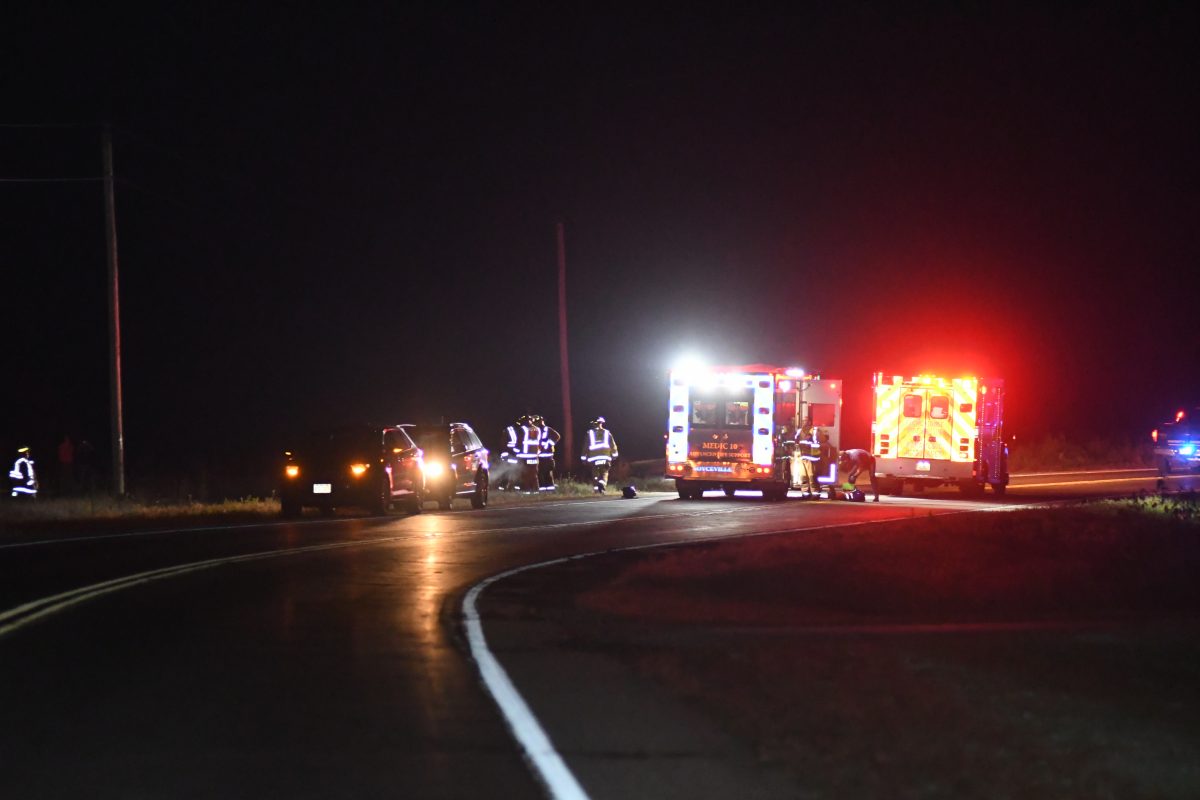 TRUCK ROLLS OVER — Emergency personnel from the Boyceville Ambulance and Fire Departments, Menomonie Fire Ambulance, the Dunn County Sheriff’s Office and the Wisconsin State Patrol worked a single-vehicle accident on State Highway 170 near 180th Street in the Town of Tiffany, just west of Boyceville, Friday night, September 25. Two male occupants of a Chevrolet truck were injured in the crash including one that was injected. Neither victim has been identified. Life Link III helicopter air-lifted the more seriously injured patient while the other occupant was transported via ground ambulance to an area hospital. Speed and alcohol are believed to be factors in the crash which remains under investigation. —photo by Shawn DeWitt

BOYCEVILLE — A single-vehicle rollover along State Highway 170 on Friday evening, September 25 near Boyceville, has injured two people including one seriously.

A male occupant, who suffered life-threatening injuries after being ejected during the crash, was air lifted from the scene by a Life Link III helicopter. The other occupant, also male, was taken by ground ambulance with unknown injuries after the truck they were riding in left the roadway, entered the ditch and rolled several times.

The names of the victims have not been released and are pending the notification of family.

The accident occurred around 9:28 p.m. last Friday on State Highway 170 near 180th Street in the Town of Tiffany, about a half mile west of the Village of Boyceville.

The Dunn County Sheriff’s Office, Boyceville Fire and Ambulance, Menomonie Fire Ambulance and a Life Link III helicopter were dispatched to the scene.

The initial crash investigation showed that a 2005 Chevrolet truck with two male occupants was traveling east on State Highway 170. The vehicle crossed the centerline, went onto the north shoulder, then over corrected and entered the south ditch. Upon entering the ditch, the truck rolled several times and one occupant was ejected.

The preliminary investigation shows that speed and alcohol were factors in the crash.

The Wisconsin State Patrol Technical Reconstruction Unit also responded to the scene and is assisting with the investigation.

The crash remains under investigation by the Dunn County Sheriff’s Office and the Wisconsin State Patrol.