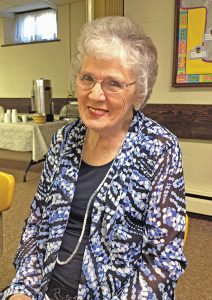 Jeanne passed into glory, peacefully at home on Friday, September 18, 2020, surrounded by her loving family.  She was born May 9, 1927, in Bay City Michigan to Harold and Blanche (Pelletier) Yacks.  She graduated from St. Joseph’s High School in 1944.  In 1945, Jeanne moved to St. Paul, MN with her best friend, Donna Bennett Path, and they worked for the telephone company.

On July 3, 1948, Jeanne married Lyle Paul Spaeth from Glenwood City, WI where they farmed and raised 12 children. Unfortunately, a tragic car accident in 1967 took Lyle’s life and almost claimed Jeanne’s life as well. She always said it was her twelve children who gave her the will and motivation to live.

Jeanne married Jerry VanDoorn on September 19, 1970.  In 1972, they moved to a farm in Baldwin, WI and then moved to Tony, WI in 1974.  After all the children graduated from high school, Jerry and Jeanne moved to Augusta, WI in the late 80s where they lived until Jerry’s death in December of 2002.  In 2003, Jeanne moved back to her hometown of Glenwood City where she lived until her death on September 18, 2020.

Jeanne was a hard-working, strong, and loyal woman who loved God and treasured her 12 children, 4 Step Children, 33 grandchildren, and 21 great grandchildren.  You would often hear her say, ‘there’s always room for one more!’  She was loving and kind, funny, and witty, and could hear you whisper from across the room.  She loved reading her Bible, singing and listening to her family sing – oh how proud they made her.  She also loved playing scrabble, doing crossword puzzles, and spending time with family – never wanting to miss out on anything.  As well, she loved to travel to see her daughters in various states and was also thrilled to take a couple trips to Europe and also one to Hawaii.  Jeanne will be greatly missed by all.

Mass of christian burial will be held 11:00 a.m. Saturday, September 26, 2020 at St. John the Baptist Catholic Church Glenwood City, WI with Fr. John Long as celebrant. Interment of cremains will be in the church cemetery.

Friends may call at the Anderson Funeral in Glenwood City from 9 to 11 a.m. on Saturday September 26, 2020.

Anderson Funeral Home is assisting the family with arrangements. www.andersonfuneralhomegcwi.com