BOYCEVILLE —  With the October 1 deadline approaching for Boyceville’s application to the state Department of Natural Resources to become a Responsible Unit for recycling, the village plans to schedule meetings next week with solid waste and recycling haulers.

The Boyceville Village Board at Monday night’s meeting (September 14) scheduled a special meeting at 5:30 p.m. Tuesday, September 22, to interview haulers or to review any submitted bids.

Information on the solid waste and recycling hauler is necessary for the application to the DNR to become an RU.

The village board must also consider whether to purchase any of Dunn County’s equipment at the solid waste and recycling collection site, said Gilbert Krueger, village president.

The equipment at the collection site is in good condition, said Bud Gilbertson, village trustee.

Boyceville should have an option for people who live in the townships who want to use the Boyceville collection site, said Luke Montgomery, village trustee.

Downing officials have indicated they would want to join Boyceville, and Wheeler may want to as well, Krueger said.

The county is asking a decent price for the compactors at the collection site, Montgomery said.

According to information provided to the village board, the total cost per unit to install the refurbished compactors at the collection sites in 2017 was $22,524.

Dunn County is offering the compactors to the municipalities that want to buy them for $15,000 each. All other equipment and infrastructure, such as site offices, safes, sheds, outhouses, fiber/container recycling roll-off boxes and used oil collection tanks will be included at no cost.

The Dunn County Solid Waste and Recycling program is expecting to shut down as of January 1.

Enough of the municipalities in the solid waste and recycling program decided to pull out by the August 19 deadline that there would not be enough revenue to operate the program.

After the August 19 deadline, Morgan Gerk, director of Dunn County Solid Waste and Recycling, then proposed that Dunn County still operate the transfer station west of Menomonie as a collection site for non-mandated recycling items, such as tires, electronics, batteries and certain plastics, and also to offer administrative services to the Responsible Units such as annual reporting to the state Department of Natural Resources and an educational program on recycling.

All municipalities in Wisconsin must either be an RU for recycling or have an agreement to join another RU.

As of the September 2 deadline, only two municipalities, the Village of Elk Mound and the Town of Rock Creek, had indicated they were willing to contract on a per capita basis for non-mandated recycling and administrative services.

The proposal for non-mandated recyclables and administrative services also included year round hazardous waste collection at the transfer station on an appointment basis with no fees.

In other business, the Boyceville Village Board:

• Approved a six-week medical leave of absence for one of the public works employees.

• Approved purchasing a pickup truck for the public works department at a cost of a little over $29,600.

• Approved asking Caleb Humpal to build a pavilion-like structure over the butter churn to protect it from the weather at an estimated cost of $2,000 to $3,000 for materials. The butter churn is part of the village’s history that came from the creamery. Since the pavilion was not in the budget, the village board will have to determine where the money is coming from, said Darlene Lee, village clerk-treasurer.

• Tabled for another month taking any action on an updated code of ordinances for Titles 1 to 8.

• Approved sending one letter out regarding the annual well permit to one of two utility customers in the village who still have private wells.

• Denied a bartender operator’s license to Cherish Vaughn, who has had two Operating While Intoxicated (OWI) convictions and a conviction of open intoxicants in the vehicle by the driver within the last four years.

• Approved a Class A retail license for Dollar General Corporation.

• Approved a picnic license for the Boyceville firefighters’ tractor pull on September 19, with a rain date of September 26.

• Approved a picnic license for the Boyceville firefighters for the fire and EMS brat feed and ATV ride October 3-4.

• Approved dismantling the old cable house since it is in disrepair and not worth fixing.

• Sent the issue of access to Lift Station No. 1 on Main Street to the finance committee so the committee can meet with the property owner, Don Rose, to work out the details for a lease or an easement.

• Scheduled the annual budget workshop for October 21 at 5 p.m. The annual employee evaluation and wage meeting will be held in closed session following the regular monthly meeting in October.

• Failed to establish a motion, which died for the lack of a second, to allow goose hunting at the Boyceville airport. 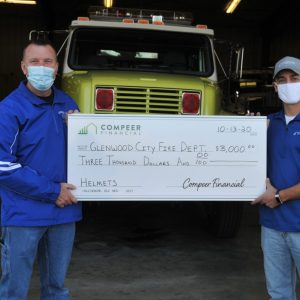 Villages of Boyceville, Downing and Wheeler band together