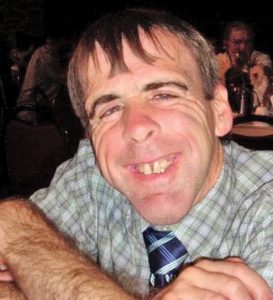 Daniel Phillip Bischof, resident of Colfax, Wisconsin, passed away unexpectedly on Saturday, August 29, 2020, at Bloomer Hospital at the age of 55.

Dan was born in Williamsport, Pennsylvania on April 18,1965 to Thomas and Karleen Bischof.  Dan lived his early years in Pennsylvania and Virginia until his family moved west to Minnesota when Dan was 4 and to Wisconsin in 1978 where he resided until his death.

Dan graduated from St. Coletta’s in Jefferson, Wisconsin in 1986.  In 1994, Dan moved in with his sister, Amy and his brother-in-law Denny Lenz and became part of their family.  Denny was not only his caretaker, but his true side kick and best friend!  If he wasn’t hanging out with Denny, he could be found at the camper with Amy.  Dan also had the privilege of watching Courtney, Carina, Matthew, Jason and Tristan grow up.  He had a true passion for animals and living on a hobby farm gave him many opportunities to enjoy this love.  He raised many hermit crabs and beta fish and then moved on to bigger things such as donkeys, cows, sheep, goats, chickens, pot-bellied pigs and his newest animal, ducks.  Dan became known to friends and family as the “Chicken Whisperer”.  Anyone that ever had the opportunity to meet Dan was immediately charmed by his infectious smile and happy giggles.  Dan loved to work the crowd whenever the opportunity arose.  Everyone was always amazed by his flawless memory.  If you ever wanted to know anything, he could tell you every detail and never forgot a name.  Dan had a true zest for life and truly loved spending time with his family. His nieces and nephews always held a special place in his heart.

Dan will be deeply missed by friends and family who knew and loved him dearly.

Please join us for a celebration of Dan’s life on September 26, 2020 from 1-3PM at the fairgrounds in Colfax, Wisconsin. Prayer and remembrance to follow.  A burial service will be held in Thorp, WI at a later date.