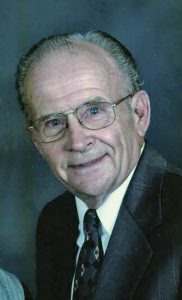 Ernie John “Jack” Timm, of Glenwood City, passed away Saturday, August 29th, 2020, at Glenhaven Nursing Home at the age of 91. Jack was born December 1, 1928, in Spring Valley, Wisconsin, to Arnold and Doris (Olson) Timm. He graduated from Spring Valley High School in 1946. After graduation Jack farmed with his dad, Arnold, and Grandpa John on the family farm in Spring Valley.

Jack met “Mac”, Maxine Lois Sanford, at the Grey Goose, a dance hall, in Hersey, Wisconsin. They were married on August 27th, 1949. They were blessed with three children, Jan, John, and Jill. In 1957 they decided to purchase a larger farm with more acreage in Downing, Wisconsin. His son, John, and wife Joy, joined him in the farming operation in 1972. Jack and Mac moved off the farm in 1979 building their new home within a mile. Jack retired from farming yet continued to “help out” until John’s untimely death in 1997 at which time the farm was sold.

Family, church and community were important in Jack’s life. Jack read his Bible daily and it went with him wherever he traveled. He was a member of St. Paul’s Lutheran Church and active in the building of Holy Cross Lutheran Church in 1969, where he served on church council.  In 2003 he and Mac were Glenwood City’s Rustic Lore Grand Marshalls. Jack, an enthusiastic wrestling spectator, never missed his grandsons’ matches or supporting his favorite team, the Glenwood City Hilltoppers! He enjoyed cabin life, fishing and hunting, traveling and crossword puzzles.

Anderson Funeral Home of Glenwood City is assisting the family with arrangements. www.andersonfuneralhomegcwi.com