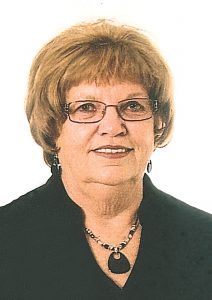 She was born January 30, 1943 in Menomonie to Merlyn (Hoop) and Maybelle (Mittlestadt) Suckow.She was a 1961 graduate of Colfax High School. She married Stan Knudson on March 7, 1964.

In 1964, she was employed by Univac in St. Paul MN as a factory worker until they moved back to Colfax in 1969.She then was employed by Solberg’s Clothing Store.In 1974, she began working in Menomonie at 3M until her retirement from there in 2004.

In her early years, she was a pitcher for the Colfax Messenger softball team. Donetta was active in league bowling in Colfax and many tournaments.She also spent time with friends playing “500” and Dirty Clubs.Her hobbies included knitting, shopping, computer casino games and reading. She was a fun loving woman whether it was in her home or traveling with family. Donetta especially enjoyed “camping” with her grandsons.Family was so important to her. It was her grandchildren that brought her the greatest joy, spending hours in the bleachers watching their games and performances.

A memorial service to honor Donetta will be held Sunday, August 23rd at 1:30 pm at Whitetail Golf Course, Colfax WI. Following the service, please join the family to celebrate her life from 2:00-5:00.Burial will be at a later date.