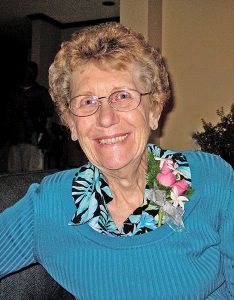 Gloria was born in Pittsburg, Pennsylvania on April 3, 1941 to Oscar and Edna (Berg) Varpness.  She was a loving and kind wife, mother, grandmother, daughter, sister, aunt and friend.  She grew up on farms in rural Augusta and Colfax Wisconsin and graduated from Colfax High School in 1959.  After high school she worked at King’s Lodge in Hayward and Dolly Madison Dairy in Eau Claire.  She hobby farmed while at home with her young sons and then worked for 3M in Menomonie from 1978 until retirement.

Gloria married Richard Stephen Berger on May 26, 1962 and settled in Red Cedar Township to raise a family.  They loved their home nestled in the valley.

In her younger years, Gloria loved horses and riding and played the accordion.  She had a green thumb and cared for beautiful flower gardens and enjoyed attracting and feeding hummingbirds.  She loved entertaining and hosting parties.  She loved genealogy and organized reams of information about her and Richard’s families.

She would bake in the morning, fix fence and shock corn in the afternoon.  Ten minute naps renewed her boundless energy.

Gloria and Richard retired on the same day in 1999.  They spent much of their retirement traveling around the country with their truck and fifth-wheel trailer.  They escaped Wisconsin winters, spending time in Alabama and later Florida.  They loved camping and the many close friendships forged during their camping years.

Gloria was blessed with grandchildren who filled her heart with joy.  Her pride in watching them grow up was immeasurable.

The last years were physically and mentally challenging for Gloria, but she handled them with grace and selflessness.  Her lifelong positive attitude continued in her twilight as an example for all.

A visitation will be held from 4:00 to 8:00 pm Friday August 14th at Rhiel Funeral Home in Menomonie.

Burial will be in St. Joseph’s Cemetery in Elk Mound.

Condolences may be made online at www.rhielfuneralhome.com.