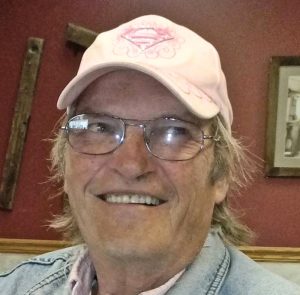 He was born on March 8, 1943 in Eau Claire to Arnold Solberg and Melvina Lee. He was raised in Colfax, WI and joined the Navy right out of High School. He later became a sheet metal worker and was a long-term member of the local union #18.

Ron loved motorcycles and traveling. He loved spending the winters in Florida away from the snow. He was well known for his love of the color pink, always wearing a pink hat and shirt. He even rode his Harley wearing a pair of pink chaps. Ron was a loving father, son, grandfather, and a friend of Bill W. for 42 years.  His greatest passion was helping those who were also friends of Bill W.

He was preceded in death by father, Arnold Solberg, brother Ross Solberg and sister-in-law Jane Solberg.

Memorial services for relatives of Ronald were held at 1 p.m. on Friday, July 31, 2020, at the Colfax Fairgrounds, S A F Park Rd, Colfax, WI 54730. A second Memorial service will be held for those who are friends of Bill W. on a later date to be announced at Cedarbrook Church, N6714 470th St., Menomonie, WI 54751. A burial will be hosted also on a later date at Riverside Cemetery in Withee, WI. He will be greatly missed by all who knew him.

The Cremation Society of Wisconsin- Altoona is assisting the family with arrangements. Online condolences can be left at www.cremationsociety-wi.com/obituary.