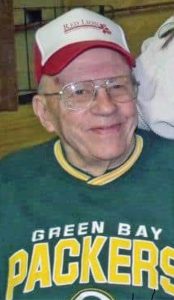 Jerry was born on Halloween ’29 to the late Alois and Mildred (Pritchard) Schwegman. He graduated from Bloomer High School in 1948. He married Colleen Gessner on June 16, 1951, in Chippewa Falls, WI. After graduating from the University of Wisconsin Agriculture Short Course, he worked for Dairy Herd Improvement Association and also farmed. When Jerry and Colleen moved to Colfax in 1961, he worked for Surge Milking Company. He later worked as a plumber and electrician, owning his own business and working into his 80’s. He was active in the community fire department, rescue squad, school board and village board, and was a member of Colfax Lutheran Church. He enjoyed fishing, hunting, playing cards and especially spending time ‘Up North’.

Jerry is preceded in death by his parents; brother and sister-in-law, Jim and Kay Gessner; and brother-in-law, Bruce Knowlton.

Memorials may be given to Colfax Lutheran Church or a charity of choice. The family of Jerry wishes to extend our sincere thanks to Dr. Obaid, Our House Senior Living, Inclusa and his family for the care he received over the years.

Due to COVID-19, no services will be held at this time. A memorial service will be announced at a later date.