BOYCEVILLE — A 58-year-old Boyceville man has been cited following a two-vehicle crash in the Village last Monday afternoon, July 20.

Mark Sawin was cited for not having a valid driver’s license and no proof of insurance following a crash at the intersection of State Highway 79 and Charlotte Street around 3 p.m. July 20.

According to the Boyceville Police Department, who investigated the incident, Sawin, who was driving a pickup and was its lone occupant, was traveling east on Charlotte Street when he failed to yield at the stop sign and pulled into the intersection and struck a south-bound sedan driven by 18-year-old Jaedon Delong of Boyceville. Emily Rutsk, 17, of Glenwood City was a passenger in the Delong vehicle.

All three people were evaluated at the scene by Boyceville Ambulance Service EMTs. Delong was transported to Mayo-Menomonie with minor injuries and later released.

The Boyceville Fire and EMS and the Dunn County Sheriff’s Office assisted at the scene. 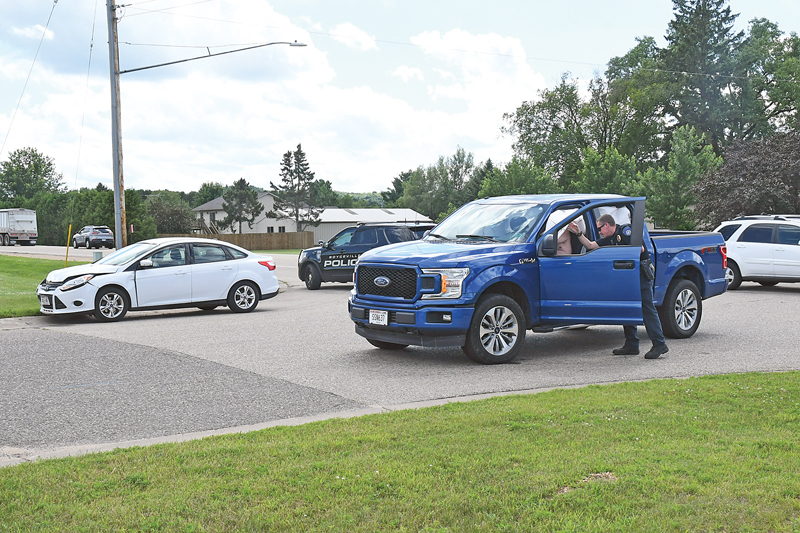 A TWO-VEHICLE accident at the intersection of Charlotte Street and Highway 79 in the Village of Boyceville Monday afternoon, July 20 drew emergency responses from the Boyceville Police Department, whose officer is seen talking to the driver of the pick-up, Boyceville EMS and Fire and the Dunn County Sheriff’s Office. Occupants of both vehicle were evaluated by Boyceville EMTs. There was no information available at press time Tuesday morning about the accident which occurred shortly after 3:00 p.m. —photo by Shawn DeWitt