DUNN COUNTY—  A 22-year-old Minneapolis man has been arrested by the Northwest Region Eau Claire Post after leading authorities in a high-speed pursuit while driving a stolen vehicle.

Devante Hatten from Minneapolis was arrested in Dunn County after authorities were able to disable the vehicle he was driving using Tire Deflation Devices (TDDs).

Earlier this morning, Friday, July 17, at approximately 5:32 a.m., a 2010 Infiniti EX35, was clocked at 103 mph along I-94 westbound by a trooper in Jackson County. The trooper attempted to conduct a traffic stop, but the vehicle fled driving off at a high rate of speed. The trooper notified additional
units of the Infiniti and the last known direction after losing sight of the suspect vehicle.

A trooper in Eau Claire County located the Infiniti along I-94 westbound and attempted to conduct a traffic stop. The Infiniti accelerated to speeds of 115-130 mph. The suspect vehicle attempted to flee- driving in-and-out of traffic. The Dunn County Sheriffs Office was notified of the pursuit, and deputies positioned Tire Deflation Devices near the Menomonie Safety Weight and Enforcement Facility near County E. The Infinity stuck the TDDs and came to a stop shortly after.

A high-risk stop was conducted and the driver, Devante Hatten from Minneapolis, was taken into custody without further incident. The Infiniti was found to be reported stolen on June 23, 2020, through Minneapolis, MN. 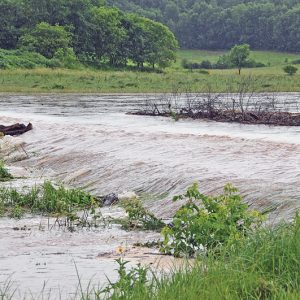 Next Tuesday is primary election day!