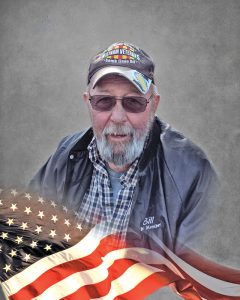 Bill was born at Luther Hospital in Eau Claire, WI Sept. 6, 1947 to Francis “Fritz” and Beverly (Benson) Nutter.  He was the oldest of three children, brother Mike and sister Cheri.

He graduated in 1965 from Boyceville High School and shortly after enlisted in the U.S. Army where he served in Vietnam from May 1967 to Dec. 1968, with the 1st Battalion, 27th Infantry, 25th Division “The Wolfhounds”.  He was honorably discharged as a sergeant and earned a Purple Heart, Combat Infantry Badge, Vietnam Service Medal, Meritorious Unit Citation, National Defense Service Medal, Good Conduct Medal, RVN Campaign Medal, Expert, M-60, Sharpshooter, M-16.  Bill continued his dedication to military service through his involvement with the local AmVets.

He had numerous jobs until 1969, when he found his lifelong career working for Soo Line Railroad (later Canadian Pacific), where he retired as a welder foreman with over 30 years of service.

Bill met Diana Lake and they had one son Jeremy “Spike” Nutter in 1974. They were married in 1978 and spent 21 years together.

He was preceded in death by his parents, Fritz and Beverly Nutter; stepfather Pete Peterson; brother Mike and sister Cheri Carlsrud.