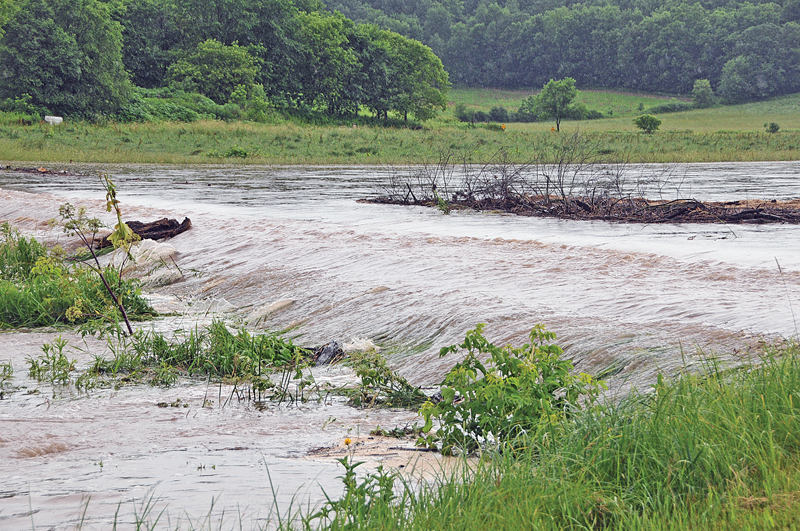 HOW IS YOUR DRIVEWAY? — This is a driveway along the County Line Road that was flooded Monday after heavy rains covered the area. —photo by Carlton DeWitt

Several town roads were underwater and some were washed away including a section of 150th Avenue in the Town of Glenwood near the county line. Besides washing away the road, the two culverts under 150th Avenue were washed a couple hundred yards downstream. Water was over 320th Street south of the Glenwood City School.

It was reported that Emerald and the Forest area received over nine inches of rain and several area roads were closed because they were under water.

Dunn County Q also had water over the road and at Q and 1150th Avenue at Best Valley, water was over that town road. 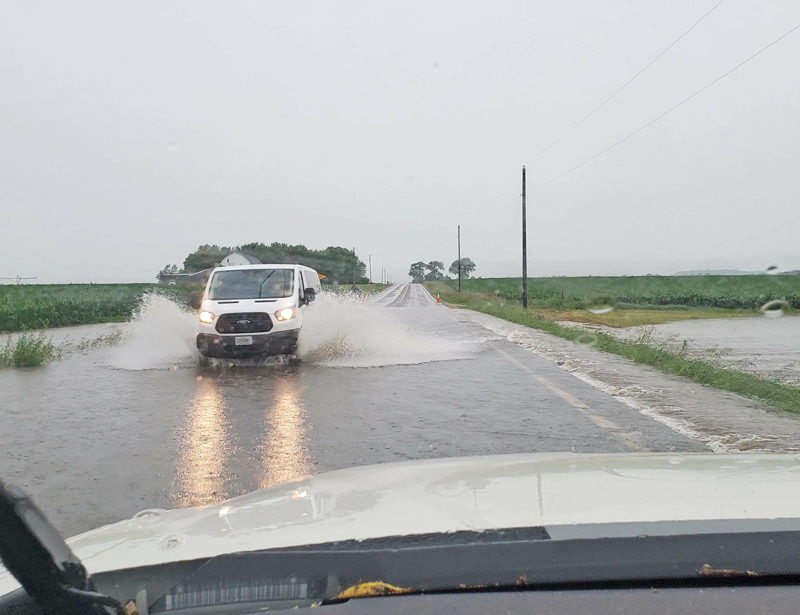 SPLASH! — Water was over the road along portions of county Highway B between Colfax and Menomonie Monday morning following at least six inches of rain overnight.
—photo by Randy Simpson 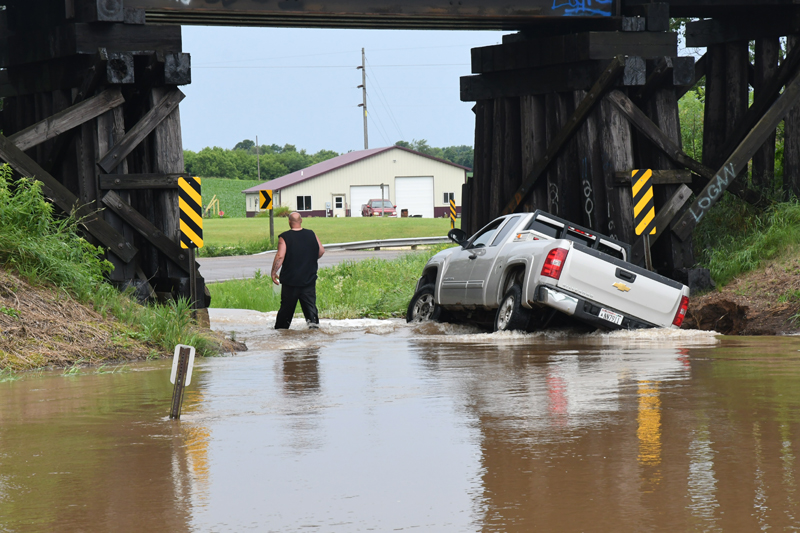 STUCK UNDER THE TRESSEL — An unidentified driver is shown walking through the flood waters after his truck became stuck under the railroad tressel on County Road S in Emerald Township Monday morning, June 29. The man reported that he had driven his work truck under the tressel earlier in the day but when he returned later that morning with his own pick-up, the roadway gave way under his truck after flooding had undermined the side of the roadway on which he was traveling. The man and his daughter, who was still inside the vehicle, were unharmed and were awaiting a tow. —photo by Shawn DeWitt 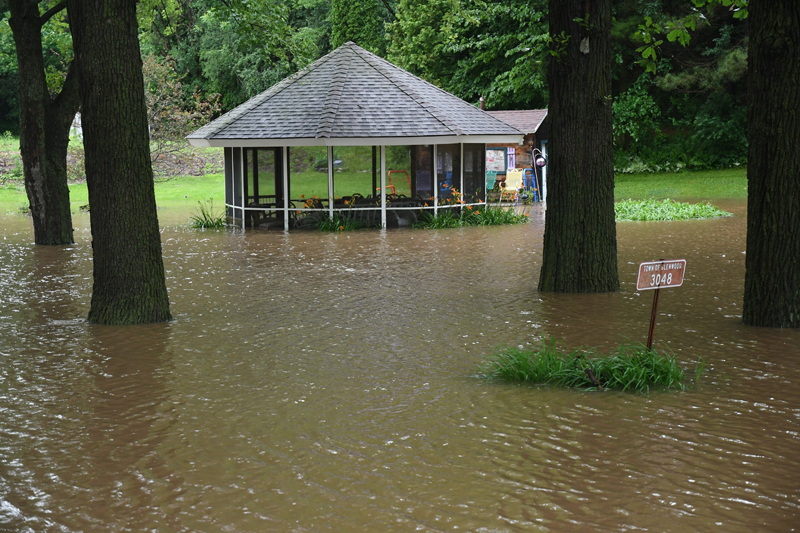 THE GAZEBO at Olde Friends Inn (formerly the Richard and Mary Rivard residence) on the north side of County Road G in Glenwood City looked more like a pool house, literally, as flood waters from Sunday night and Monday morning’s rain filled much of the bed and breakfast’s lawn. —photo by Shawn DeWitt 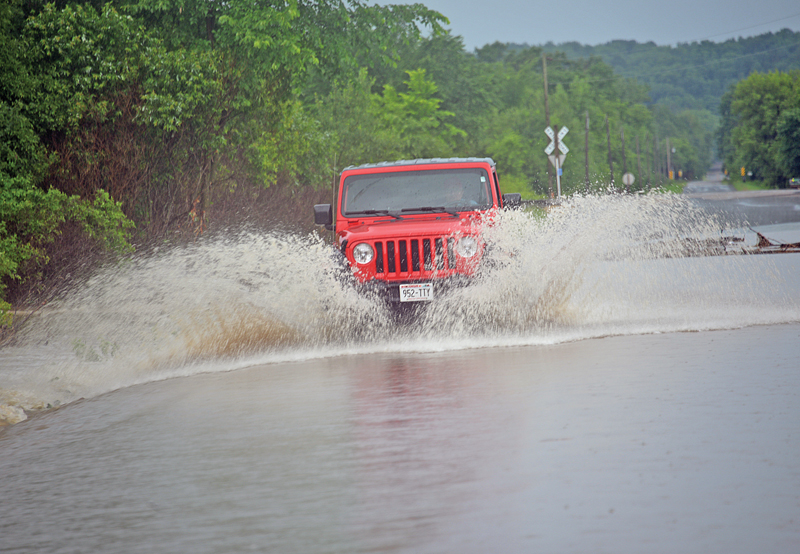 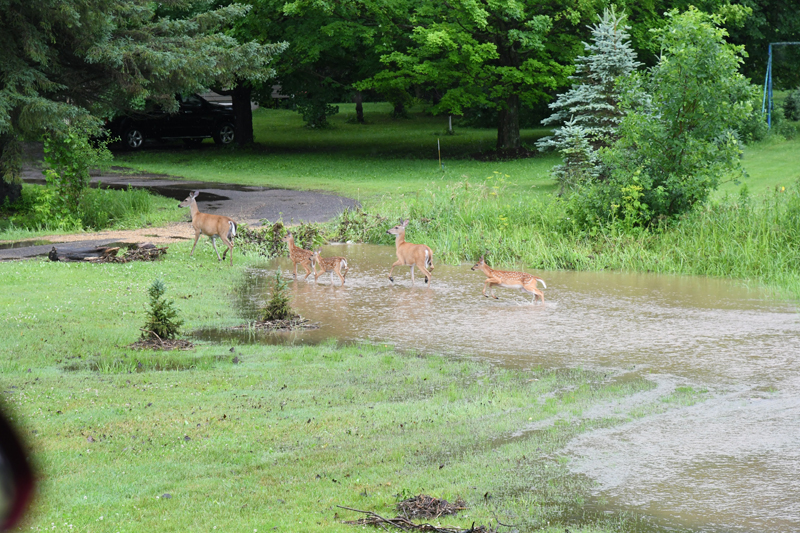 WILDLIFE WASH — A pair of does with three fawns waded through the running waters at the corner of State Highway 128 and County Road G near the Glenwood City Mobile Home Estates Monday morning, June 29. —photo by Shawn DeWitt