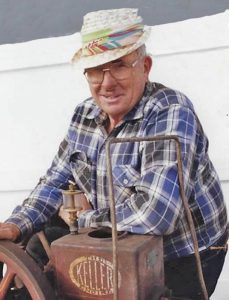 Norval graduated from Colfax High School and continued his education at the Minnesota School of Business. He started his business career peddling rutabagas, cabbage, and potatoes to the homes in Eau Claire. This led to the opportunity of selling potatoes and lumber to the local schools and restaurants and earning him the nickname ‘Bud the Spud Man’. Norval also supplied Uniroyal with blocking material and lumber to secure the transport of tires in railroad cars. A cornerstone of the Wisconsin Agricultural Community, Norval received his calling to farming, leading to his lifelong occupation of dairying, leasing of bulls, and raising of crops.

Norval was known for his passion of collecting antiques including Model Ts, gas engines, Lionel trains, and cast iron seats among other collectables. Starting in high school, Norval’s true passion for 70+ years was planting pine trees which influenced his farm name of ‘Evergreen Farms’.  In Norval’s later years, he could be frequently found slowly driving around the Popple Creek neighborhood observing local activities while sharing stories and jokes.

Norval was preceded in death by his Parents August and Laura Beyrer, Wife: Beverly, Son: Norval ‘Buddy’ Beyrer. Norval will be dearly missed by all who knew him.

There will be a visitation at Olson Funeral Home in Bloomer on Friday June 26th, 2020 from 4-7pm. Graveside services will be held at the Popple Creek Cemetery on Saturday, June 27th, 2020 at 3pm. Online condolences may be expressed at olsonfuneralhomebloomer.com