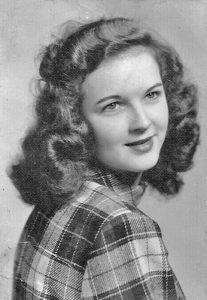 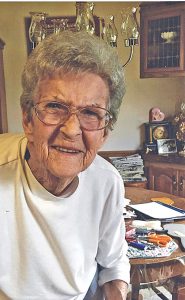 Phyllis Jean Ryan age 89 of Glenwood City, WI, entered her eternal rest on June 5, 2020.  Phyllis lived at home until she fell and broke her hip on May 1st, 2020.  She was in the hospital for a few days then was moved to the Baldwin Care Center for therapy and rehabilitation.  Because of Covid 19 and being unable to visit with her-we brought her back home to spend her final days on the farm with her family and kitties.  Special thanks to everyone at the Baldwin Care Center and Adoray Hospice Care for all your care and support.

Phyllis was born at her family home in Mansfield Ohio, November 14, 1930, the eldest of three daughters. (Phyllis, Velma and Ruth) to Russell and Hazel Fink (Bond). In 1936 they moved to a home in Cardington, Ohio where she would spend her school years–graduating from Cardington High School in 1948.

Phyllis had 5 boys (David, Rick, Roger, Larry and Mike Brandenburg) from a previous marriage and moved from Ohio to Grand Rapids, MN then to Duluth MN, then to the Boyceville-Glenwood City Wi area.

In 1964 she met and married Robert M. (Bob) Ryan who passed away May 1st, 2013 just one year short of their 50 year anniversary.  Phyllis and Bob lived in Wilson WI where they had many friends, and would spend most Sunday afternoons playing the card game (Idiot’s Delight), with Irene and Barb Peterson.

They bought the Morris and Elsie Ryan farm (Ryan family farm) by Glenwood City WI, and would spend the rest of their lives living on the farm.  Phyllis and Bob’s home was on the farm, but they spent most of their working years living in a travel trailer while Bob worked road construction throughout the state of Wisconsin.  Phyllis would go along and picked up part time jobs, working at a diner in Sun Prairie, WI and later flagging on the road construction jobs Bob worked on.  She flagged on Hwy 43 between Milwaukee and Sheboygan and on Hwy 19 and 151 by Madison, WI.  She did this for about 10 years.

Phyllis and Bob spent the remainder of their time on the family farm raising beef cattle and cats and working in the garden and going to auctions. Phyllis loved to garden and raised strawberries and raspberries along with other fruits and vegetables.  She had a war with weeds and could often be seen with weeds sticking out of her pockets.  Everywhere she went if she saw a weed where it shouldn’t be she would pick it.

Mom was always interested in the weather and sometimes had the weather channel on TV throughout the day.

Auctions were their social events and they would spend most weekends taking in auctions and buying antiques.  They met many people and always enjoyed the time spent looking through boxes of stuff to buy.

Phyllis also worked on the Springfield election board for 24 years and was a member of the Glenwood City Historical Society.

Phyllis had very caring neighbors who would check in often to see how she was.  A special thank you to Jerry Maske who would visit Mom for a cup of coffee and share the news of the community with her most days of the week, and a special thank you to Al and Cindy Krafve for being there whenever called upon, and caring so much for Mom-to make sure she had eternal security.  Thank you to Pastor Rick Mannon for coming and ministering to Mom and leading her to salvation.

She is also survived by many great grandchildren, relatives and friends.

Visitation service will be held on Tuesday June 9, 2020 at the Anderson Funeral Home in Glenwood City from 4:30 to 6:00 p.m. with a public graveside service and burial in the Glenwood Cemetery to follow.