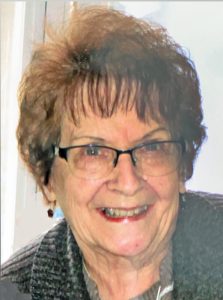 Joan L. DeSmith, age 77 of Downing, WI died peacefully at home surrounded by her loving family on Saturday, June 6 after a courageous battle with cancer.

Joan was born on June 23, 1942 in Emerald, Wisconsin, the daughter of Walter and Lillian (Colburn) Cassellius.  She grew up in Emerald and graduated from Glenwood City High School in 1960.

After graduation she worked at the Telephone Company in Glenwood City for several years.  She was married to Charles J. DeSmith, August 19, 1961.  They moved to a farm in Glenwood City where they farmed and raised 3 kids.  She also worked at Trient Technologies in Woodville, Wisconsin for 30 years.  After retirement, they settled in Downing.

Joan and Chuck loved to dance at the White Owl Pavilion and various dance halls.  They enjoyed traveling to their cabin in Minong where they loved to fish and visit with many friends.  She was a great cook, loved to garden, bowl and attend all her grandkids various sporting events.   She was an avid Packer fan, loved watching her son and cousin, Bob, race stock cars and watch Nascar.  Joan was a kind-hearted soul who loved people and never had a bad word to say about anyone.  She welcomed anyone into her home at any time.  She took great pride in her children and adored her grandkids and great grandkids.  She will be sadly missed by her many friends and family.

She was preceded in death by her parents, Walter and Lillian Cassellius, her son, Christopher DeSmith, and baby infant daughter.

Private funeral services will be Wednesday, June 10 at 1 p.m. at St. John the Baptist Catholic Church.

Interment will be in St. John the Baptist Catholic Cemetery in Glenwood City, WI following the ceremony.

All are invited to a Celebration of Life from 4-7 p.m.at Dave and Rochelle Ashleson’s home (2480 130th Ave, Glenwood City, WI) for Joan and Christopher DeSmith.

Anderson Funeral Home in Glenwood City is assisting the family.