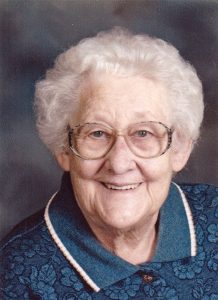 Dorothy was born May 15, 1925 in Baldwin, WI. The third child of eight born to Louie and Jennie (Gillis) Draxler. The family moved to Glenwood City when she was 3 years old. She attended and graduated from Glenwood City High School and began her career as a bank teller. Dorothy worked at First National Bank of Glenwood (now Hiawatha Bank) for 32 years. She also met the love of her life, Jerry Mitch and they were united in marriage on May 19, 1947 at St. John the Baptist Catholic Church. To this union, 10 children were born.

Together they owned and ran a dairy farm, raised crops, pigs and chickens. Dorothy enjoyed gardening and visiting with customers while selling her vegetables at her produce stand.

Dorothy loved making quilts, altering and patching clothes; She replaced hundreds of zippers in her lifetime. She also knitted, wrote and published short stories, served as the Town of Glenwood Treasurer and enjoyed singing in the church choir.

A private service will be held for family with burial at the St. John the Baptist Catholic Cemetery in Glenwood City, WI. Local arrangements by the Anderson Funeral Home in Glenwood City.