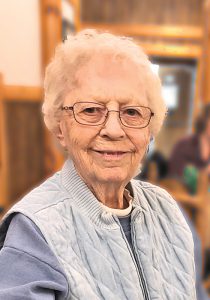 Audrey Smith (92 years old) passed away on May 24, 2020 at Glenhaven Inc.  in Glenwood City after a brief illness.

Audrey was born on August 8, 1927 in Glenwood City, WI to Henry and Cecelia (Rosciszewski) Berends and attended area schools.  When she was a young lady she moved to Mequon, Wisconsin and worked at the Gilbert Shoe Factory.  She later moved to Grafton, Wisconsin and worked as a waitress at the Grafton Hotel where she met her husband, Willis Smith.  She and Willis married in 1970, living in Oshkosh, WI initially and later moved to Winneconne, WI where they purchased a beautiful, historic home that was Audrey’s passion to renovate and decorate with antiques.  During this time Audrey owned her own florist shop and later was a waitress at the Fin and Feather Supper Club on the Wolf River in Winneconne.

When Audrey and Willis retired, they moved to Chetek, WI where Willis grew up, and lived in a home on Prairie Lake where they enjoyed “lake life.”  Unfortunately, Willis passed away in 1995.  Audrey continued to live in Chetek on Prairie Lake enjoying all the area has to offer.  During her time in Chetek, Audrey was very active in golf leagues, bowling leagues, taking bus trips and going out to eat at the many area restaurants.  Audrey made many friends while living in Chetek.

Audrey never had children of her own, but she loved Willis’ children, grandchildren and great-grandchildren as her own. She sold her home and moved in with her son in a larger home, only 2 doors away for 6 years, before retiring to Havenwood Assisted Living last June. Bringing the most joy to Audrey were two little girls who called her “GG”– her two great-granddaughters, Caroline Audrey (named after Audrey Carol) and Emily Ivy Jane.

And many nieces, nephews and friends.

Interment will be in St. John the Baptist Catholic Cemetery in Glenwood City, WI. Funeral services will be at a later date. Local Arrangements by the Anderson Funeral Home. To share a memory visit www.AndersonFuneralHomegcwi.com